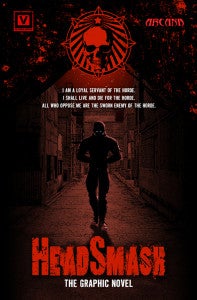 Filmmaker Vlad Yudin has brought together an anticipated graphic novel, tied into a screenplay he's developing for next year, and came to the Chicago Comic and Entertainment Expo this weekend. The story revolves around Smash, an orphan who's brought up by a powerful and corrupt man and who finds himself squaring off against that man and his organization after his wife and unborn child disappear. Set in a "pre-apocalyptic" future, the story follows the physically-gifted Smash in his effort to rescue the ones he loves. Yudin joined ComicBook.com to discuss Head Smash this weekend. ComicBook.com: So you're out in promotion of the comic, right? Not the movie? Vlad Yudin: I feel personally that nobody really markets graphic novels. I feel like people find out about graphic novels after they become something else--a film or a TV series or somethign like that. We're putting a lot of effort into presenting the graphic novel to the world. We're going to C2E2, going to Detroit Comic Con, going to various other comic cons. Ones in Miami, Texas, in Philadelphia of course, Wizard Con, and then of course unveiling the full book at San Diego Comic Con in July. ComicBook.com: There are a lot of elements that feel more street-level than the kind of dystopian concept betrays. Yudin: The main action takes place in the city of Ares, which is kind of a pre-apocalyptic society. It's a city that's completely deteriorated by corruption. The Horde has many different levels to it. It starts at a street/gang level where they recruit members and they train them and then it goes to the mid-level which is a more dominant part of the society and it goes all the way up to the elite of society. If you'd seen the actual graphic novel, there are different chapters where they talk about dominating the police force, dominating the legal system, dominating the actual logistical powers that run the city and way beyond that. It's a very spiritual connection; they sell a premise that's almost a religion, you know? You get in the Horde and you save yourself. They definitely dominate different avenues of how they rule and dominate the city. 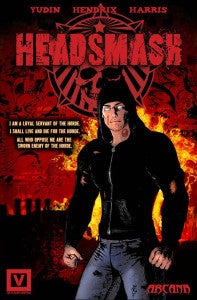 ComicBook.com: I'm struck by the fact that those different aspects of the group also serve to attract different types of recruits. It's so decentralized and yet so powerful that it's almost kind of its own worst enemy. Yudin: Of course, because in any history, once an empire becomes too big, it will collapse so I definitely agree with you. ComicBook.com: For the lead character to begin in the organization, was it important to build a feeling that the Horde aren't inherently bad? You don't want him to start the story as an out-and-out villain. Yudin: Absolutely. He's definitely saved by the Horde because he has nothing, no type of belief in himself, he's growing up in an orphanage. That's definitely the case with a lot of gangs and different organizations is that they recruit new members from the bottom up where they have no other type of belonging before that. So Smash grows up as an orphan; he has no parents and he's always in trouble in the orphanage, and then here comes Maurice, who is actually one of the most powerful men in the city and in the organization and he takes him in; he becomes his mentor and almost a father figure to him. He supplies him with everything he needs and he makes him a somebody, so absolutely before him the Horde becomes a newfound family, absolutely. 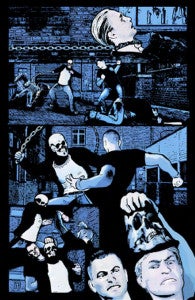 ComicBook.com: The idea of giving him enhanced abilities--it's not really a superhero thing, but it gives him the leg up on the people he's squaring off against...did Smash's character come first or did the concept of the world he inhabits come first? Yudin: Oh, man, that's a great question. I think it was a combination of things because whole elements of the story are driving the story forward. Different elements of the story itself come together like a puzzle. When you're first reading it or watching it or whatever, you really kind of try to understand where it's going becuase ther'es a lot of different things thrown at you. The serum that he discovers that gives him that ultimate power and makes him unstoppable to a lot of people, it becomes a gift and a curse because it gives him extreme strength that he's able to use but it has a lot of side effects like any drug would. So he also mentally starts breaking down. You see it throughout the whole novel and usually you don't show that. A lot of superhero graphic novels or comic books, you get the power and then you become unstoppable but there's a price to pay with that kind of drug or any type of enhancement that he takes and so he's definitely suffering from that as well. ComicBook.com: Now, looking at your filmography, you've got a real move toward genre fare in a way that you hadn't done before. is Head Smash influencing your film work as well? Yudin: Sci-fi and supernatural thrillers have always been something I wanted to do, and going forward that's what I'm going to be focusing on in many different ways. But it's really about the story. I'm also doing a film right now that's called Generation Iron, and it's a modern-day Pumping Iron film, about body building. Completely different--to me, it's all about the emotional connection that you have to the actual stories and the characters. Sometimes you watch a certain film and you think about it and let's say it's a sci-fi film but you really connect to the characters and you think about it and you think that maybe it could be a different setting, it doesn't have to be sci-fi. So it's really all about what kind of connection you present to those characters and how well people can connect to it. But I'm definitely going more into the sci-fi genre and definitely going into the supernatural thriller genre. 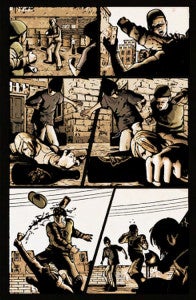 ComicBook.com: What can you accomplish in comics that you can't on film? There are a lot of differences between the two media. Yudin: Well, the beautiful thing about graphic novels and especially the style of art that we're using is very gritty and kind of grainy. When you open up Head Smash, you want to take your time in looking at each of the panels and you want to really observe the art. In film, of course, it's moving images so you watch it quic and you get a lot of great, dynamic scenes but in a graphic novel you can take your time, you can absorb the art, you can look into it. I don't think it's about what you can or can't do--I think you can do almost anything in film now, or mostly anything if you're into CGI and stuff like that. But in a graphic novel you can really slow down, look at the art and really examine it. It's a totally different experience from watching somethign in the theater or on TV or something like that. It's really art. It's like to see a painting or something. I mean, you can look at a painting and see it differently sometimes. I think it's similar in graphic novels, especially with the style of art that we're going for. I think it's a different experience but it's a great experience.

Avatar: The Last Airbender Exec On the Show's Beef With James Cameron's Avatar