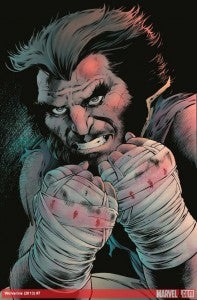 Long-standing rumors that Wolverine may be dying later this year may get a shot in the arm from an announcement made today at the X-Men panel at the Chicago Comics and Entertainment Expo: Wolverine will be “Killable” this summer.

Kicking off in July's Wolverine #6 with an “enormous” event that the publisher promises will garner mainstream media attention. That same month, of course, The Wolverine will be in theaters, promising all eyes on the character.

Series writer Paul Cornell said, “This is a very special story, Sabretooth and a group of villains will find out that Wolverine is killable. It's a very Western-style story, we're leading him into the valley of the shadow of death, with Kitty Pryde at his side. It all starts with something enormous that happens at the end of #6 in July.”

Artist Alan Davis, who has drawn a number of Wolverine/Sabretooth battles in the past, will handle art chores on the tale.

“Big changes to Wolverine have usually happened in team books, but this happens here,” the writer added. “It's going to change him across the board. I'm not going to say you're going to like it, but I am saying you'll react.”

“It sets a chill into him that starts slowly and keeps going. It doesn't just frighten him, it shakes him to the core. He tries not to show it, but it changes everything about him,” Cornell told CBR. “'Mortal,' the one-off story in #7, goes into the immediate changes, but it's going to keep going, informing everything he does and really paying off with terrible results by the end of 'Killable.' It's like an enormous shadow is looming over him. Which is, as others comment, just what the rest of us live with every day. He's going to take a walk through the valley of the shadow of death.

“It's about what happens when someone whose entire persona, fighting style and attitude is shaped by one big factor in their lives loses that. Logan has always gone into battle allowing himself to take a certain amount of damage. That'll have to change, but that takes doing. He's always assumed he had a long time to figure things out, to let life happen, but now, should he be more committed, should he make his relationships more important, should he try and start a family and keep it together, just for once? Most warriors have to deal with the idea of death. This is new to him, and it changes the sort of warrior he is. It makes him braver and tougher, because now he has everything to lose. But that journey to braver and tougher is a very difficult one.”