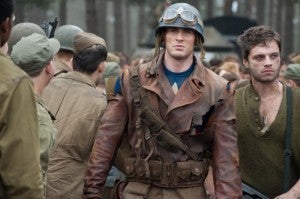 A twenty-minute interview that Captain America: The Winter Soldier star Chris Evans conducted with Collider has been released to the Internet as a full-length video, a week it was conducted at the Toronto International Film Festival.

At the festival, Evans was asked about the deleted scenes which seemed to greatly expand his character's role in the opening act of The Avengers, and told Collider they would be likely to play into Captain America: The Winter Soldier. Evans is quoted as saying, “They had all those deleted scenes with The Avengers because a lot of those scenes are for Captain 2, you know what I mean? It was good stuff, but it all felt like that was his story. It is a different movie. With The Avengers there was so much to cram in. Like I said, it was a long movie anyway. So I think making it any longer would have just been exhausting.”

That hasn't stopped the scenes from making its way online and gathering some support from viewers and critics, especially since the waitress who appeared to be flirting with Steve Rogers in one of them later appeared in a somewhat inexplicable cameo in the film. The actress, Ashley Johnson, was reportedly also cut from another of director Joss Whedon's projects, but her role remains largely unedited in his forthcoming low-budget Shakespeare adaptation Much Ado About Nothing. With Cap's love interest from the first movie (Peggy Carter) seemingly too old to carry on a relationship with him in the second, fans have speculated that the waitress might actually be a plausible love interest for the character.

Captain America: The Winter Soldier will be in theaters on April 4, 2014.