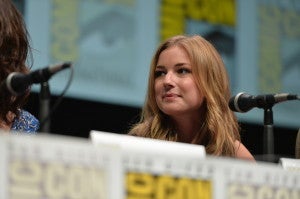 In a new interview in Nylon magazine, the filmmakers behind Captain America: The Winter Soldier discussed the casting of Revenge star Emily Vancamp in the movie, saying that they wanted to get somebody who could immediately grab Steve Rogers' attention as the love interest.

"We wanted someone that Cap would have an immediate interest in," said Joe Russo, who co-directed the film with his brother Anthony. "It had to be a strong-willed person, and we felt that Emily’s work on Revenge was a great test tube for what this character could be. She’s obviously very credible with physicality, she holds the screen really well, and she even looks like the character from the books."

Her physicality, actually, is one of the things that many fans have expressed concerns about, given how thin and slight she seems in photos and on Revenge, so it may put some critics at ease to know that not only is it something the Russos have been considering, but that they think they've licked it.