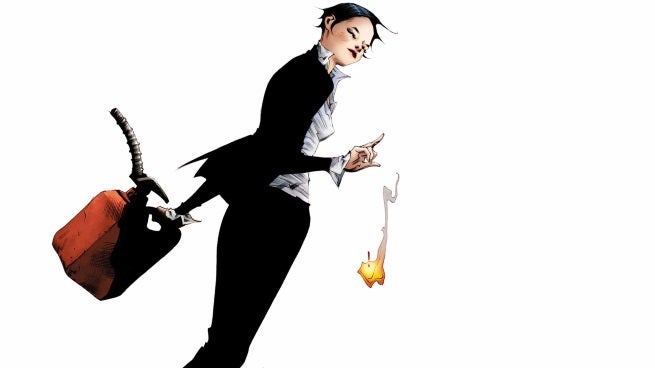 The latest issue of Catwoman, issue #39, confirms canonically that Selina Kyle is bisexual.

For those who haven't been following, the most recent run of Catwoman is written by Genevieve Valentine and features the art of Garry Brown. The story sees Selina Kyle hanging up her Catwoman persona in order to become a mob boss, only to find the persona taken over by Eiko Hasigawa, the daughter of a rival family's boss.

So on the eve of the two families going to war, you'd probably be surprised to find Selina and Eiko sharing a rooftop kiss, but that's exactly what occurs in Catwoman #39.

On her blog, Valentine confirms that this is not a one-time deal:

She's flirted around it – often quite literally – for years now; for me, this wasn't a revelation so much as a confirmation…Was it a surprise for them? In terms of their sexualities, not particularly; certainly it's no surprise to Selina that she has an attraction to a woman. Is this particular kiss a surprise? It's definitely surprising; this is the very last thing you're supposed to be getting into on the brink of war, and they both know it. But this isn't the first intense moment between them.

Valentine goes on to assure fans that this reveal doesn't somehow invalidate Selina's previous relationship with Batman, because that's not really how being bi-sexual works.

While I don't want to spoil what can't yet be spoiled, please be assured that Selina's longstanding connection to Batman has not been forgotten; that is not how bisexuality (or humanity) works. Selina doesn't care easily, but when she does care it strikes deep, and there will be plenty of that coming up.

Valentine mentions that the Selina/Eiko relationship (Selinko? Eilina?) was actually already gaining some steam in the shipping department on Tumblr, which actually reminds me of the Legend of Korra series finale from 2014, where a long-shipped same-sex relationship was confirmed as canon.