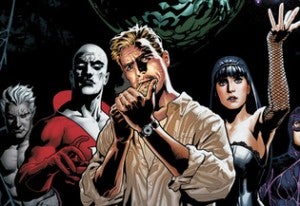 In June, DC Comics's New 52 will be only 51 comics - will we see a new book added in July? Well, it doesn't look like it--at least not yet. So far, DC has released the solicitations for its Superman, Batman, The Edge, Young Justice and Justice League families of titles and all we have at this point is a cancellation--Batman Incorporated, which was widely expected. But as the Beyond the New 52 solicitations have now hit the DC blog, the question now becomes whether the publisher hasn't yet released the Dark group because there's something in there they hope to protect. Fans have seen the Justice League Dark cover, of course, as it's part of the trifold Trinity War cover. Other than that, though, we're in the dark (no pun intended) so far, and it seems likely that it's being held until after things like the collected edition solicitations because  there's either a new #1 (we'd guess Trinity of Sin: The Question #1) or a cancellation. And if there's a cancellation, what would replace both that and Batman Incorporated, let alone keep the number at 52 with a third launch?