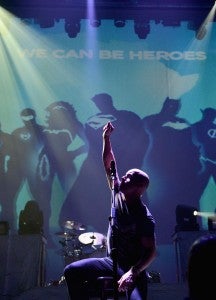 Pop singer Chris Daughtry, best known as a runner-up on American Idol's fifth season and the frontman for the band Daughtry, is joining DC Comics' We Can Be Heroes initative to combat famine and drought in the Horn of Africa, according to an exclusive story at The Hollywood Reporter.

Daughtry has recorded an acoustic version of his song "Rescue Me," which will be released on iTunes soon with 100 percent of the proceeds going to We Can Be Heroes. The Hollywood Reporter says that DC's charity is teaming with Save the Children, International Rescue Committee and Mercy Corps.

A video of the performance is currently embedded in a story about the move at Entertainment Weekly, which is owned by DC Entertainment's parent company, Time Warner.

“We had this song that says it all,” Daughtry--who is reportedly a lifelong comic book fan who attended last year's San Diego Comic-Con International secretly with his son, dressed as Batman and Robin--told The Hollywood Reporter. “It was written about feeling like you needed to be rescued from something. It just felt like a great message for what’s going in the Horn of Africa. … We just thought it would be a good idea to do more stripped down, less bombastic version of it.”

Apparently while at San Diego last year, Daughtry stuck up a relationship with DC Co-Publisher Jim Lee, one of his favorite artists, who asked him if he would like to be involved in the charity. Daughtry, who is already involved with a number of other African charities,  joined up.

“It was devastating, what I saw,” Daughtry told THR. “Heartbreaking. You can see that stuff all the time on TV, but until you experience it firsthand, it doesn’t put it into perspective.”

Chris Daughtry Joins DC's We Can be Heroes