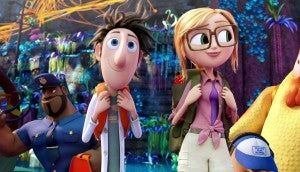 Sony Pictures has released a new look at the upcoming animated family comedy Cloudy With a Chance of Meatballs 2.

Picking up where the 2009 original left off, the film is hoping to extend the franchise after the first installment surprised Hollywood by taking in more than $120 million domestically. But with a four-year gap between installments, will it be able to pull a Star Trek and keep the momentum rolling even though the film's younger target audience has likely started to age out of it a bit?

In the film, inventor Flint Lockwood's genius is finally being recognised as he's invited by his idol Chester V to join The Live Corp Company, where the best and brightest inventors in the world create technologies for the betterment of mankind. Chester's right-hand-gal - and one of his greatest inventions - is Barb (a highly evolved orangutan with a human brain, who is also devious, manipulative and likes to wear lipstick). It's always been Flint's dream to be recognised as a great inventor, but everything changes when he discovers that his most infamous machine (which turns water into food) is still operating and is now creating food-animal hybrids -- "foodimals"! With the fate of humanity in his hands, Chester sends Flint and his friends on a dangerously delicious mission, battling hungry tacodiles, shrimpanzees, apple pie-thons, double bacon cheespiders and other food creatures to save the world again!

You can check out the clip, in which Flint sets about recruiting his group to save the world, below.

Cloudy With a Chance of Meatballs 2 Clip Released