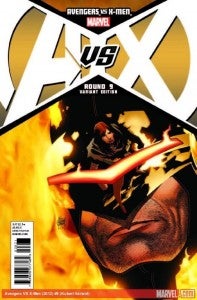 Welcome to a new month and a new week for hot comic books, faithful readers!  It's officially August, and the final days of summer are here.  The last bits of vacation are being planned, back to school shopping is on the way, and yet the comic book world still turns.  Keep reading on to find out just what comes out this week and what you can expect on the shelves of your local comic book store! Marvel Avengers vs. X-Men #9  After last issue's stunning battle in Wakanda, are the X-Men about to be down for the count, or are they just getting stronger?  How will Hope now factor into this?  The final issues are upon us! Avengers Academy #34  The school is closed and it remains unclear if it will reopen.  In the meantime, an old foe reappears with an offer that some of the former students won't refuse. X-Men #33  The history of the proto-mutants is revealed here, and Mr. Grey makes a move that no one saw coming.  Plus, what is Colossus planning? Avenging Spider-Man #10  Captain Marvel continues her stellar debut in the Marvel universe as she teams up with Spidey in this issue. Daredevil #16  Foggy happens to find out a secret that Matt has been keeping from him for some time, and it ends their business! First X-Men #1  It's the long-awaited series courtesy of Neal Adams and Christos Gage, as they bring you the history BEFORE the X-Men. Hawkeye #1  Matt Fraction takes the helm on this new series focusing on the solo Avenger! DC Comics Justice League International #12  The final issue is here.  See what happens to the remaining team members as they say farewell to the fallen Rocket Red. World's Finest #4  Power Girl and Huntress continue to figure out where the road leads them in this new world as they battle an unstoppable creation. Earth 2 #4  We've seen Hawkgirl, the Flash, and now Green Lantern.  What other heroes will continue to roll out from this new series? Smallville Season 11 #4  The season premiere event concludes here!  Now see what else spins out of this venture after season 10. Batwing #12  Lord Battle's secrets are exposed here, and Nightwing makes an appearance along with the JLI!  How much more adventure can you take! Animal Man #12  The prelude to "Rotworld" is here.  Be sure also to check out this week's Swamp Thing #12 and check out the crossover! Green Arrow #12  Green Arrow takes to the busy streets of China here, and it'll be arrows versus elbows when he lands!  Detective Comics #12  Robin guest-stars here, and just what is Mr. Toxic's big plan?  The Two-Face feature is worth checking out too!! Image Comics Thief of Thieves #7  Nothing goes well for Redmond, but fortunately this is the end of the first arc, so a fresh start is ahead, right? Spawn #222  Tremor teams up with Spawn to get to the bottom of the experiment that made them both what they are today.  What's a little military spying? Black Kiss II #1  Howard Chaykin's classic comic from the 80s is back for another round in this six-part miniseries!  Be here for the next chapter! Epic Kill #4  It's hunting, hunting, and more hunting, as well as unstoppable forces unleashed!  No big deal right? Godland #36  Well, it's quite the flirty issue here, and some questions appear to get some answers. Boom Studios The Hypernaturals #2  The Earth is at risk, and it's up to a new team of untested, and in some cases, burned out, heroes to save it. Planet of the Apes Annual #1  You didn't think the final issue of the series was the last you would hear of these characters did you? Higher Earth #3  Deadly creatures await Heidi and Rex as they land on yet another strange planet. Top Cow Artifacts #20  The mega-series continues here, and it's part two of the "Phantoms of the Heart" storyline, so don't miss the next adventure! Think Tank #1  A brilliant man who happens to help create weapons of mass destruction decides he can follow that path no more, but can he ultimately escape it? Dynamite  The Boys #69  It's part four of "The Bloody Doors Off", and several characters begin tying up loose ends. Dark Shadows/Vampirella #1  Vampirella and Barnabas Collins are about to meet, as both are in New York following a similar path. The Spider #4  Anput continues to reign violence down upon New York, and The Spider has to beat the clock in order to stop her.