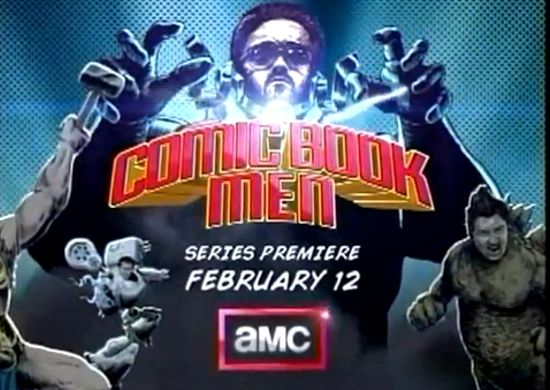 As a huge Kevin Smith fan, I'm eagerly looking forward to Kevin Smith's unscripted television series about life in a comic book store. The series had previously gone under the working title Secret Stash, but it has now been revealed that it's going to be officially called Comic Book Men. The new more descriptive title is likely a good move, as not all potential viewers might be aware of the name of Kevin Smith's comic book store. Adding to my optimism for the series, Comic Book Men is being aired on AMC, a network that has already given us the best show on television in The Walking Dead. AMC is also showing a strong commitment to the show by premiering it right after the aforementioned The Walking Dead, thus ensuring it's going to have a great lead-in audience. The official premiere date for Comic Book Men is February 12, 2012. Kevin Smith has also tweeted two very short videos of the Comic Book Men. Here's the first clip, where Kevin Smith appears and provides a good laugh with his response about the most recognized faces on Earth.

Here's the second clip, which comes across a little bit like The Big Bang Theory with the whole "or even hold a woman" joke.

GTA Online Celebrates the Fourth of July With Discounts, Money Bonuses, and More