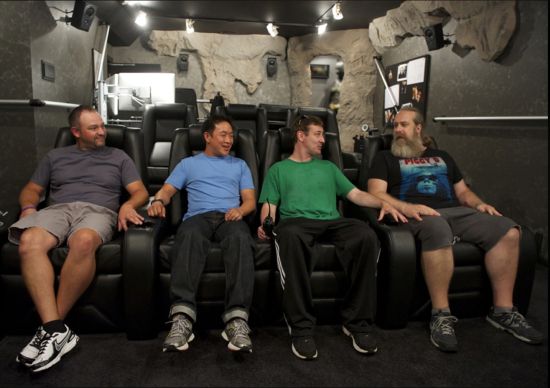 On the “To The Bat Cave” episode of Comic Book Men, a customer named Chris visited the Secret Stash looking for Hot Toys. Ming showed the customer a Hot Toys Batman DX12 from The Dark Knight Rises. Chris revealed he had an entire floor in his house devoted to the Batman, which he described as his Batcave.

The Hot Toys Batman DX12 was marked at $500, but Chris asked Walt if he could do $450 if he gave them a trip to his Batcave. Walt agreed, as he said he couldn’t turn down an invitation to the Batcave.

A seller brought a set of the original twelve Star Wars figures on a display stand into the Secret Stash. Walt called pop culture expert Robert Bruce over to appraise the figures. Bruce valued the figures at $200 retail, and Walt offered $125 for the figures. After some negotiation, the seller agreed to sell the figures for $130.

In a discussion at the store, Walt pointed out how it's crazy that adults are going out there dressed as superheroes, and there’s no media coverage of it. Walt observed that for the media to take notice there needed to be the rise of supervillains.

A seller brought a 1976 Dakin Underdog into the Secret Stash. The seller asked $400 for the figure, but Walt offered $200. After some negotiation, Walt agreed to buy the figure for $265.

Walt, Bryan, and Ming drove out to Delaware to visit the Batcave. At the house, they found a walkie talkie on the front steps, through which Chris directed them to enter the house. After going down into Chris’ basement, they found it was filled with Batman memorabilia. Chris directed them by walkie talkie to open up a bust of William Shakespeare and push a button, which opened up a door to a Batcave.

In the Batcave is more Batman memorabilia, including a replica of Christian Bale’s Batman suit. The Batcave also included a home theater with a 120” screen.