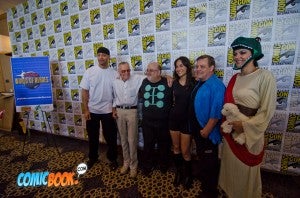 Visionary comics creator Stan Lee, Star Wars star Mark Hamill and many more converged on San Diego’s Comic Con International late this morning for a panel celebrating Stan Lee’s World of Heroes, the new YouTube channel that brings together stars from a number of geek-centric worlds to create a kind of virtual TV network stocked with shows that revolve around geek culture.

"It's everything to do with heroes," Lee explained to the audience, saying that the shows would not only deal with actual on-camera superheroes, but the issues surrounding them as well, including one series that just looks at those famous "comic shop arguments" like whether Superman is faster than The Flash or who was the best movie Batman.

The channel features both scripted and unscripted television, ranging from sitcoms about superheroes dealing with crippling emotional problems to reality shows about fans who have massive collections of whatever their particular passion might be. Involved in every show as an executive and sometimes guest star is Lee, who joked, "I'm very hesitant to put my name on things."

Featuring Lee, Hamill, reality star Adrianne Curry, executive producer America Young and Bonnie Burton, star of the World of Heroes series Geek DIY, the panel brought together a disparate group of talents to talk about their upcoming projects, and talking about how amazing it was to be working with Lee and Hamill. "I can't believe I'm on this panel," said Young. "I feel like I should be live-tweeting this," joked Burton.

Curry in particular talked about her enthusiasm for the network, saying, that she finds the Internet to be a great way for fans to connect with the things they're passionate about and explore their inner geek.

"This is a great avenue for people to get involved with things they love and people they love," said Curry of the Internet.

Check back later today for tons of pictures and video interviews with Curry, Young and Burton conducted at San Diego Comic-Con International.