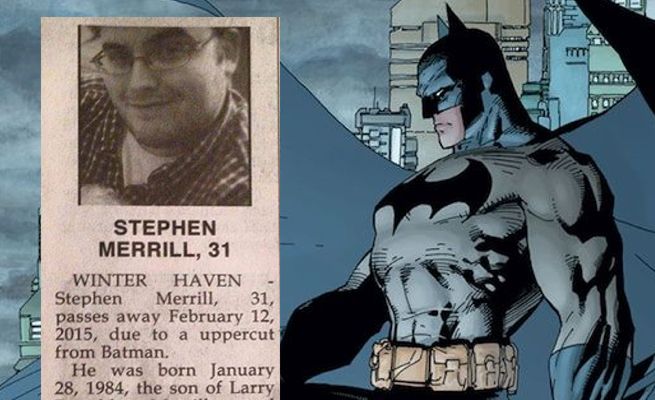 Have you ever wanted to be punched to death by Batman?

Well, no, probably not. But one comic book fan whose family didn't know what to say for "Cause of Death" in his obituary decided that he would have appreciated "Uppercut from Batman" as the official ruling.

The result, as you'd expect, is an obituary that has gone viral online.

It came about when the family,  who understood that the local newspaper would not run 31-year-old Stephen Merrill's obituary without a cause of death, didn't have an official report before they needed to submit the obituary to the funeral home. A member of Merrill's family joked about Batman as his cause of death, and everyone present apparently thought it was funny.

"It was worth it for the family. It was the only time the family was able to laugh in days," said a friend of the deceased to ABC Action News. "We were all laughing, and it made the situation easier to deal with."

You can see the full obituary online here.

Comics Fan Obituary Lists Uppercut From Batman As Cause Of Death