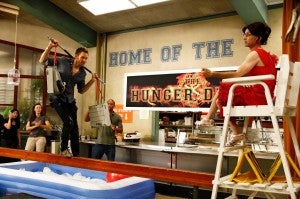 NBC has released a few new clips in promotion of the upcoming fourth season of Community, their low-rated but fan-favorite sitcom about a group of maladjusted community college students. And it looks like neither Abed Nadir, nor Annie Edison, are any more prepared for graduation at the end of this season than were the fans of the series when it looked like season three might bring the end of the series last year. In the first clip, Britta discusses the impending "last first day of school" with Abed, giving him "permission" to retreat into his "happy place" when he needs to--which seems to be about thirty seconds later. Check it out below.

In the second clip, traditional good girls Annie and Shirley are seen vandalizing Jeff's car, as a form of protest by Annie against Jeff's decision to graduate early. Check that one out here.

Finally, there's a clip that isn't actually new footage at all, but a long amagamation of various (mostly nonverbal) moments that have taken place around the study room table over the course of the previous five seasons; here's where we get the only promotional image so far of Chevy Chase's Pierce Hawthorne, who has left the series but will appear in all but one episode this year. So far it seems as though NBC may be hedging their bets on the prospect of a fifth season, trying to market and promote the series without Chase to get a feel for how much of the audience was there just to see the comedy icon.

returns on February 7 at 8 p.m. EST (which, as fans know, is actually October 19, which the network cleverly hid).