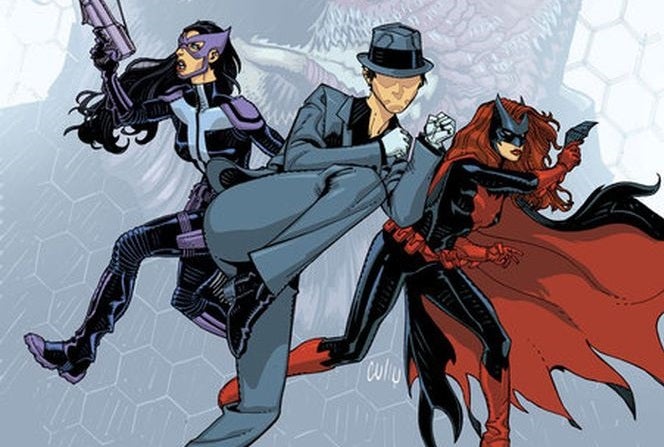 Greg Rucka will return to the world of Batwoman and The Question -- two characters on which he's left an indelible mark -- with Convergence: The Question in April and May.

The writer, who co-created the current iteration of Batwoman and helped guide former Gotham City cop Renee Montoya into action as The Question, hasn't worked for DC Comics since The New 52 relaunch kicked off in 2011.

Rucka joined us to talk about his upcoming series, his thoughts on Gotham's interpretation of Montoya and the odds of his returning to DC longer-term.

Editor's note: This interview was written before the covers to the second set of Convergence issues, including a picture of Batwoman, were released but (as you can see below) answered after, so one or two questions might seem out of date but it felt worth  keeping them. 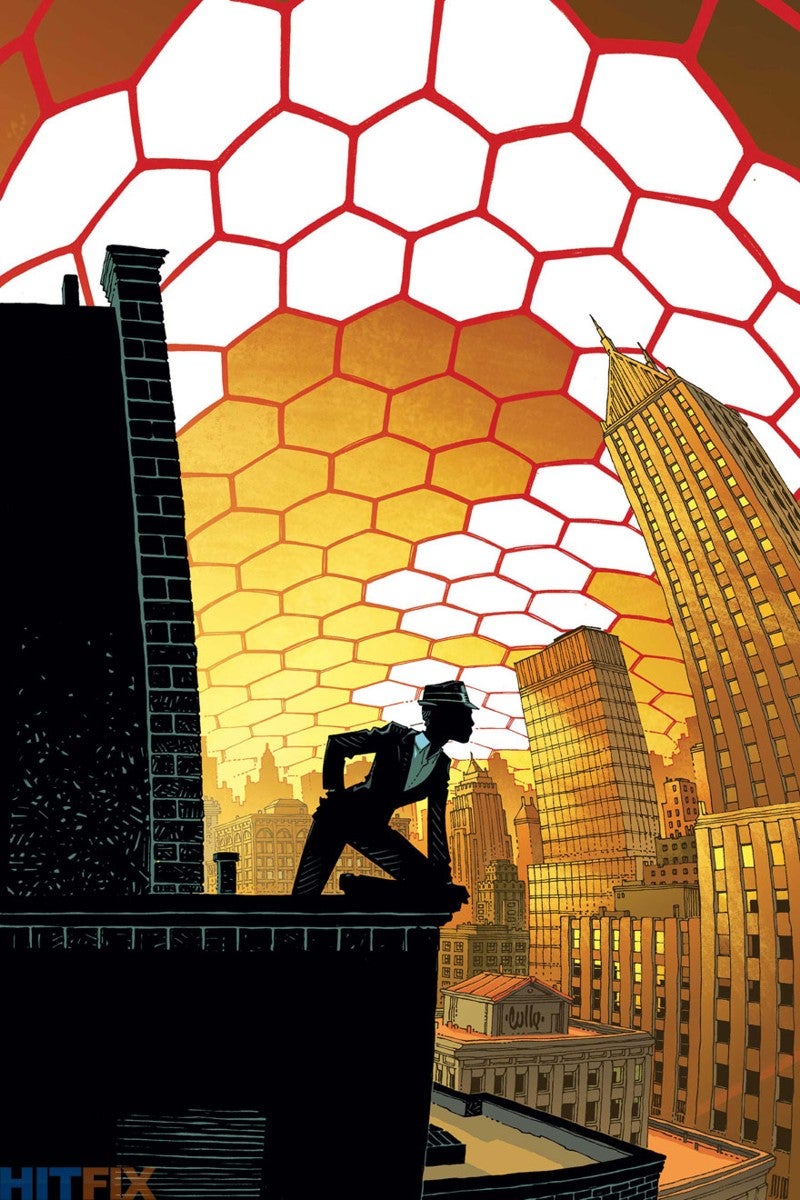 This version of The Question came into being during one of DC's longest and most well-regarded mega-events, 52. Now you're finally getting to write her again and it's in a two-month series that some fans are worried won't "count." That seems like a weird dichotomy. Did it inform the way you're writing at all?

It certainly counts to me. I wouldn't have taken the offer if I'd been told it wouldn't matter, if what Cully and I are doing with Renee would have no impact. I can't speak to DC's plans going forward, but I'm not sure I'd be able to write a story about Renee that didn't "matter" even if I wanted to.

But yes, it absolutely informed the writing. It's coming home in so many ways, and even within the confines of the event it still is writing Renee and Harvey and Helena and – now that the cover to issue 2's been released – Kate. My chance to put my grubby fingerprints on them all again, I suppose, but I think both Cully and I feel a sincere obligation to get this right, to make it a story that will give those fans of these characters and their relationships a smile.

Renee is obviously on Gotham right now, giving her a kind of visibility outside of the bat-books that she hasn't had before in a lot of ways. Do you feel like other-media adaptations can help bring a book like this in front of a new audience or is that something that doesn't even occur to you?

I don't consider it. Comparing Renee in Gotham to Renee in this is…problematic. It's the alternate universe thing; Gotham's Renee is clearly born of work that I and others have done with her, but that doesn't make her the same character as much as it makes her yet another interpretation, another iteration. If Gotham's success brings people to the book, I think that's wonderful, that can in no way be seen as a bad thing. But it's just not something I can let inform the writing.

Cully is a wonderful choice to draw a book like this. How'd you manage to draw that straw?

Hah! Honestly? The absolutely honest answer was that Dan DiDio called me and said, hey, we're doing this thing, we're doing two issues with Renee, and you're obviously the first choice for who we want to write it, and I suspect you'll pass, but I wanted to at least make the offer. And I thought about it for all of maybe five seconds and then told him I'd do it if Cully agreed to draw it. Dan said he'd talk to Cully, but – if I remember correctly – I actually called Cully first and said, I've been offered this thing, I'll do it if you'll draw it. 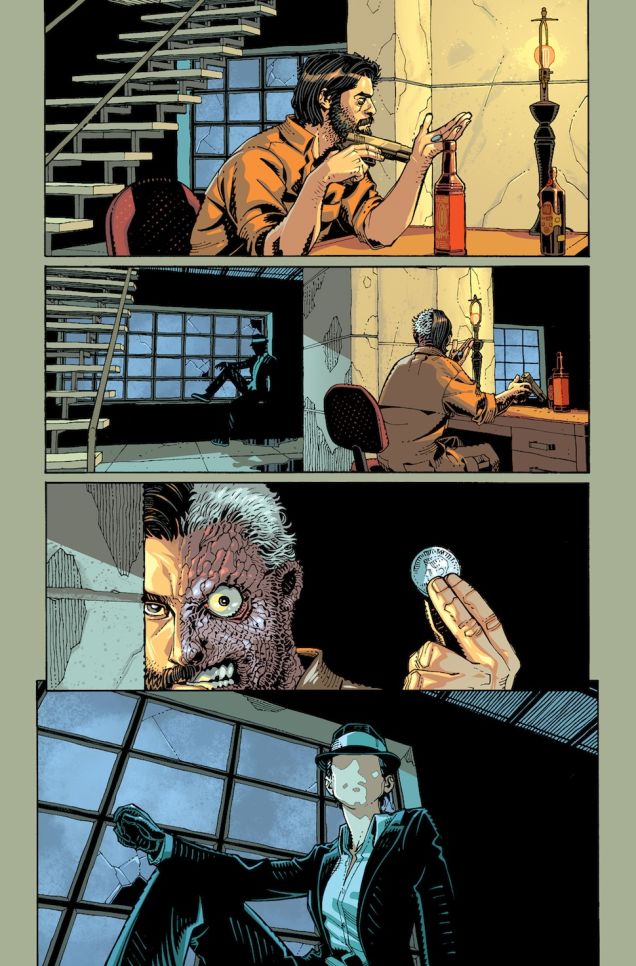 All we got in the solicitations is that she's battling with the Harvey Dent from "another world." Any clues as to where our threat comes from?

Don't read too much into the copy, especially when it's promoting an event! We're with the pre-New 52 Renee, Helena, and Harvey in a pretty sad-state Gotham City. The Battle of Two Harveys is the overt conflict, but there's much more going on, especially for Renee. Convergence has created a status quo for these characters that is, at its best, challenging. Surviving, existing in that status quo… it comes with a cost.

Teaming up with Two-Face can't be a comfortable position for a former Gotham cop to be in. Is it safe to assume that dynamic will drive a lot of the book?

Renee and Harvey have always had a very odd bond, as far as I've written them, going back to the very first Renee story I did for DC, "Two Down." It's never been just cop-and-criminal between them. There's a peculiar understanding between them; Renee, to me, has always been able to see the path of Harvey's madness in a way that even Batman has never negotiated. I'm not sure I'd ever call them friends, especially after what he's put her through, but Renee has always been sympathetic to him, at least, and that care, that guardianship, drives much of our story. 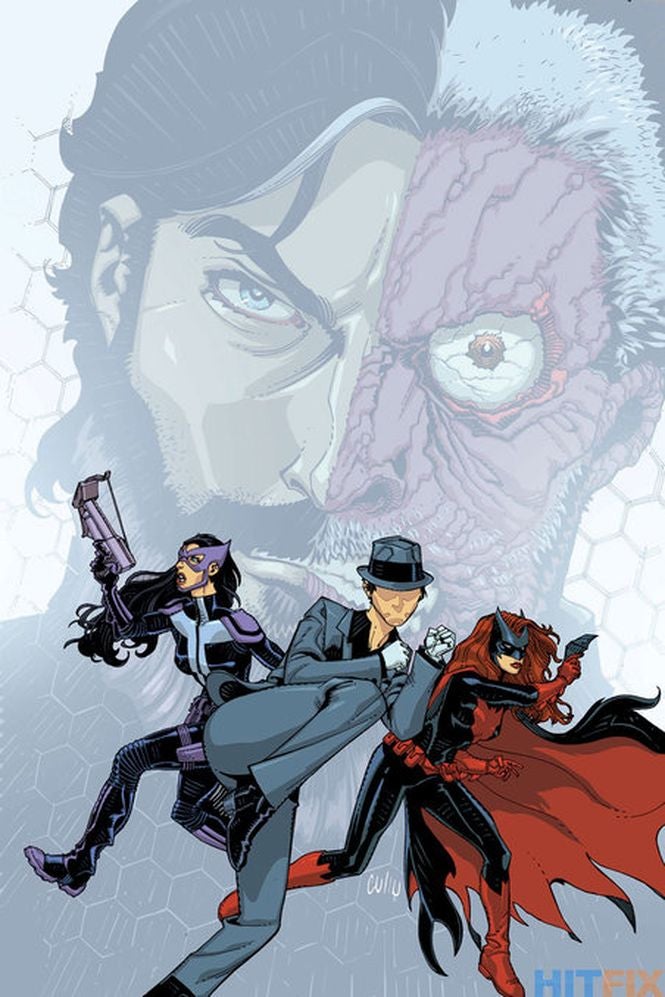 Who else might we see in this story? Any chance of Batwoman making an appearance?

Asked and answered, my friend! As revealed in the release of the cover to part 2, yes, Kate is in this story… and saying anything more would definitely be telling. I will say it's been as much of a delight to write Batwoman again as it has been to write Renee and Helena.

Obviously, you've got a lot of irons in the fire right now. What drew you back to DC for this project?

It's pretty straightforward, honestly. It's the chance to write Renee. I've been very fortunate in so much of my career in comics, but it's a rare opportunity to feel like you've had a chance to say good-bye to a character, to leave with any sense of closure. I'm not saying that's what this will be, that I'll never write her again, but by the same token, if this is, at least I'll have been able to say farewell.

Any chance we'll see you back in the New 52 anytime soon?

Oh, there's always a chance, absolutely. Working with Marie Javins on Convergence has been terrific, and Dan, at least, has made it very plain that I'm welcome at the company. It comes down, as always, to multiple factors, not the least of them being Who and When. But I'm old enough that I've learned absolutes are very, very dangerous things to put onto the record. So there's always a chance.

When you look at a project like this – it's bringing back worlds we thought were "dead," but only for two months – do you see it as an opportunity to give the character and her world closure, or a new beginning?

That's a very interesting way to pose the question, actually. Because so much of what's drawn me to this has been that sense of closure, but it's closure for myself, not for the character. These characters are bigger than I am, and I firmly believe in their perpetuality – if that's even a word.

As brilliant as Scott Snyder's work with Batman has been, Batman will survive without him when the time comes that he steps away, you know what I mean? It's the height of arrogance, I think, for a writer or an artist to think they are the character's master. If I do my job right, Renee – and Helena and Harvey and Kate – they'll all be in a place to carry forward, even if that forward is outside of the "mainstream" continuity. At the least, they will be in position should someone else come along and want to use them.

What has Renee been up to in the time since we last saw her? Obviously some time – I understand about a year – has passed since these characters were snatched away.

Oh, that's… not a question I can answer without really giving away too much of Convergence. She returned to Gotham, a city that she has a very difficult relationship with, a city that holds a long, stormy history for her. She wasn't happy to come home. She was even less happy to find she couldn't leave.

What has she been up to? Trying to do her best for the people she loves. Not always succeeding.

Covering Convergence: Greg Rucka Takes Renee Montoya Back to Gotham As The Question