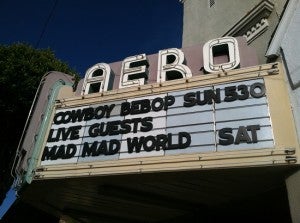 Truth time: I’m not the world’s biggest anime fan, though that might be just because I haven’t been exposed to a lot of it. I love what Miyazaki I’ve seen and dug Battle of the Planets/Gatchaman when I was a kid, but I don’t seek out anime on a regular basis.

A big exception to that was back in 2000 or so, when I discovered a TV show called Cowboy Bebop. The opening credits had me hooked right from the start with the great song “Tank!” and its stylish visuals. The great design and fun characters kept me interested, engaged, and entertained for all 26 episodes.

Back in those days of yore, when I heard that not only was there a movie version, but that I would be able to see it on the big screen at The Drexel, my favorite theatre in Columbus, OH, I was so excited! …

That excitement faded a bit after about the first 45 minutes of the movie. The show's great opening credits song was not in the film, the zippy action and fun had largely been replaced with monotonous pondering and a bit of nastiness… I was confused and a little disappointed, honestly. And I haven’t seen it since.

So when I got the opportunity to revisit Cowboy Bebop: The Movie on the big screen, a decade later, courtesy of the “Setting The Scene: Art Directors Guild Film Society Series 2013” at The Aero and ComicBook.com, I was interested not because I was a huge fan of the movie, but because I really wanted to see if my love of the show and expectations set by it had unfairly diminished the movie in my eyes way back when. 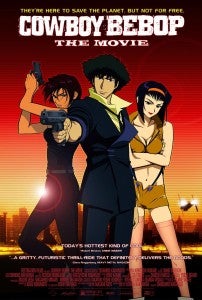 At first I thought maybe that was case. After an intro from moderator and ADG Film Society founder John Muto, featuring scenes from the show to get us in the mood, the movie started. The action opening, with svelte, big haired lead ass-kicker Spike Spiegel and his big, bald, cyborg armed partner Jet Black stopping a robbery not to save folks, but to get the bounty on the robbers.

It’s fun, well-staged, and introduces the basic concept well -- and felt like the series in tone. After some interesting though not as exciting as the show’s credits, featuring the world the movie is set in, which isn’t a whole lot unlike ours, cool space ships and future technology aside, the movie settles into its ponderous, surprisingly slow groove.

While fun action and banter are sprinkled throughout the movie, all highlighted by amazing music from composer Yoko Kanno, the overall tone and occasional monotony of the exposition-filled dialog make it seem longer than its 120 minutes. That’s not to say it’s a bad movie -- far from it. Bebop creator Shinichirō Watanabe and screenwriter Keiko Nobumoto seem to have gone for a more grounded feel to the movie, complimented by the wonderful production design from Shiho Takeuchi. They achieved this, but lost some of the excitement of the show.

The movie’s plot centers on a former soldier named Vincent Volaju, experimented upon and basically driven insane, unable to discern reality from his dreams. He plans on releasing a deadly virus to which he is immune at a Halloween parade on Mars is interesting and leads to a great finale with terrific Bruce Lee-inspired fight choreography and lovely visuals, but it takes too long to get there. There is a bit of nastiness involving the villain and Bebop regular Faye Valentine that I could’ve done without, too -- especially since the film seems to really want us to sympathize with Vincent to a degree.

The movie shines most in its moments with the characters Cowboy Bebop fans know and love from the show. Girl hacker with a boy’s name Edward and the super intelligent Corgi Ein get some nice chances to shine and lighten the mood. Jet has the kind of put upon older guy role that shows how much he loves his team despite their dysfunction, and it works well. Faye, aside from a few scenes, really gets some fun moments, and Spike does his cool tough guy in a skinny tie thing very well.

The new characters, the aforementioned Vincent and female co-lead Elektra, I found myself less interested in, to be honest. Their shared past is mentioned and very important to the plot, but I never felt the emotional connection the filmmakers clearly intended.

Since it was part of the “Setting The Scene: Art Directors Guild Film Society Series 2013,” there was a panel afterword, with Muto moderating director Peter Ramsey (Rise of the Guardians) and English-language Spike voice actor Steve Blum (who has also worked on cartoons such as The Avengers: Earth's Mightiest Heroes and Transformers). Ramsey is clearly a fan of the show and the movie, his own film being, design-wise, the most anime-influenced DreamWorks movie I’ve seen.

Blum was funny, always ready to bust out one of his voices. He also mentioned he’d only seen Cowboy Bebop for the first time two years ago and didn’t know much about its wide fan base until he started attending conventions. His candor about how he views his voiceover work as something other than acting was a little too modest, though he admitted the Cowboy Bebop: The Movie upped the ante in that regard, resulting in what he considers his first actual “acting.” His description and anecdotes regarding his anime voice jobs, the fact that he usually doesn’t see scenes in advance and only has his own lines in front of him with around three takes to get the dialog to match the “mouth flaps” (his term for the lip movements) were interesting. It seems like a more difficult job than I ever realized, and now I get why English-dubbed anime characters sometimes talk so fast.

Questions from the audience were from sincere fans, the most notable to me was when someone asked if Sony, who released the movie, had looked for bigger celebrity types to voice the cast. Blum admitted they probably did, but since the pay was so low, he figured everyone passed, and he was just happy to get the job. The fact that the main English-language vocal cast is from the original show really helps the movie, so I’m glad Sony couldn’t afford whomever they considered big starts back then.

Overall, the Q&A was fun and interesting to fans of anime and voice over work. For me, the main reason for going was to give Cowboy Bebop: The Movie another shot. After doing so, my feelings about film are the same after watching it in 2013 at The Aero as they were in 2003, watching it at The Drexel. It looks lovely, the parts that work, work great, and the parts that don’t work drag the whole thing down. It’s worth watching for fans of the show, but I don’t know if a viewer going into it cold would be particularly enthralled, music and too-infrequent action aside.

D.J. Kirkbride is the co-writer and co-creator of AMELIA COLE, an ongoing digital series from Monkeybrain Comics (in print from IDW) and the upcoming NEVER ENDING from Dark Horse Comics. He won an Eisner and a Harvey as an editor and a writer for the POPGUN anthology from Image Comics and co-wrote stories in TITMOUSE MOOK 2 and OUTLAW TERRITORY 3. D.J. also wrote a book of ninja poetry called DO YOU BELIEVE IN NINJAS? (Creative Guy Publishing).