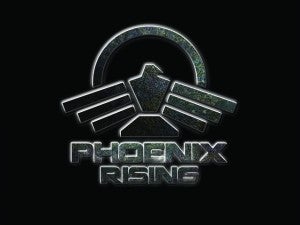 Captain Power and the Soldiers of the Future

, a live-action/CGI hybrid created in the 1980s, sponsored by toy manufacturer Mattel and largely written by comics star J. Michael Straczynski, is heading back to television soon.

While the original series was a half-hour, weekly kids' show, the new iteration--titled Phoenix Rising--is being conceived as an hour-long drama aimed at an older audience, exploring the darker and more mature aspects of the original series' mythology.

The series, set in the years after mankind went to war with intelligent machines and lost, set Captain Jonathan Power against Lord Dread, a formerly-human man who was friends with Power's father until the two of them came to blows over how to best deal with the seemingly-inevitable victory of the machines. Dread allowed himself to be subsumed by the enemy, while Power chose to soldier on and try to save humanity. 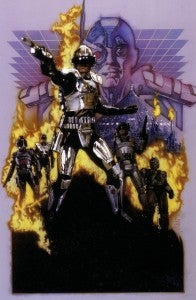 Tim Dunigan, who headlined the original series, is set to return as the father of Jonathan Power, who appears in the Jor-El role of a kind of holographic mentor.

The original series featured fully-human Soldiers of the Future, who wore suits that enhanced their abilities and allowed them to fight the machines more effectively, but that mythology is being tweaked somewhat for the reboot.

"Power Suits themselves are seen as another variation of thinking machines, linking completely to the human system of its wearer," creator Gary Goddard told io9. "More than ever, Phoenix Rising explores life and death issues, issues of what makes humanity different, or better or worse, than thinking machines? We explore the issues first introduced 25 years ago, in what we thought was a 'sci-fi adventure' based on a world that could not really be. 25 years later we see we were close to the future than we thought (hopefully not the apocalyptic part), and so we decided to lock our story into the real events that are transpiring now."

Straczynski, for his part, had a take on the characters and the mythology as well--but it wasn't what the producers were interested in, and they couldn't lure him over to their version. Apparently JMS had an outline for three films, beginning with the Metal Wars and leading through essentially to where the TV series was set--but producers were afraid that trying to get a movie, let alone a trilogy, greenlit would take years and possibly get the whole thing stuck in development hell.

Producer Roger Lay said of the new series, "The Jonathan Power you meet in the first episode is not really the hero you remember from the first season. He feels like he's got a legacy from who his father was -- but maybe it's not a legacy, maybe it's a curse." In that way, he explained, it's a bit of the origin story that the original never had.

Interestingly, the original series took a bunch of production money from Mattel, partly as part of a push by the toymaker to try and integrate interactive technology into the programming. If you pointed your Captain Power toy gun at the screen at a key moment, for instance, it would react to the action on television. It seems that whatever other elements of the old series may be dismissed, that is one that's more suited to today than ever before, as AR and "second screen" apps could simulate that kind of experience for every viewer, rather than just the handful who have the right toy, and are so common nowadays that it wouldn't even seem particularly intrusive.