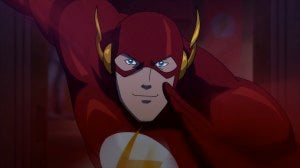 This morning during an executive session for The CW, Deadline reports that network chief Mark Pedowitz laid out a few details about Flash, essentially confirming this morning's reports for the first time. Pedowitz said that the series will be the origin story of Barry Allen who will be introduced as a recurring character on Arrow this season, as previously reported. "We want to expand the DC universe of characters," he said. The executive also confirmed that Amazon, the rumored Wonder Woman series that had been compared to Smallville, is currently stalled. "Amazon is on pause," Pedowitz is quoted as saying. "The script is not exactly what we wanted, and with an iconic character like Wonder Woman, we have to get it right." Whether The Flash will have any connection to the cinematic universe being created by Man of Steel and Batman vs. Superman is unclear. A Justice League movie is rumored to be in development. The Flash got his first starring role in a feature film in Justice League: The Flashpoint Paradox, which hit on DVD, Blu-Ray and streaming services today.