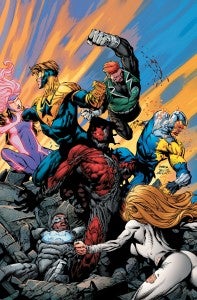 With only two issues left before the story wraps, Dan Jurgens and Aaron Lopresti's Justice League International found itself wrapping up the big, sweeping action beats of the story this month in preparation for the denouement in JLI #12 come August.

Squaring off against a nasty, powerful and all-new (read: no easy way everyone knows to beat them) group of villains in the streets of New York, Guy Gardner narrates a story that sees him finally coming to grips with being on a team with the likes of Booster Gold and August General-In-Iron...just as the whole thing is getting ready to wrap up.

Jurgens joined ComicBook.com to talk about the issue, and the impending end of the series.

Why did you choose to make Guy Gardner the POV character in this issue? Was it just a matter of his turn in the lineup or was it more that he was finally coming around to his teammates?

Both, in a way. Everyone was going to get a turn over the course of this arc, but Guy got this issue to show exactly what you suggested-- that he's coming around to this group of characters.

I like the fact that, even in the angry mob, you've got a guy or two here who says, "Umm...is it just me or do these people seem freaking crazy?" It gives the whole thing a more realistic feel.

It's consistent with the way we've approached things all along. If we're going to say that not everyone loves the various heroes, we also have to show the opposite. And the fact is that these guys have a pretty good track record of saving lives. A lot of people will be influenced by that.

I can't help but feel like the "I buy what you're selling and all, but the speeches? Bo-ring!" comment is a bit of an indictment on people who want to be involved in politics, but have attention spans too short to really understand what they're kvetching about. Is that fair to say?

Very much so. Everyone wants to blame the politicians, but how often do you meet anyone who actually has looked at both sides of the issue and has a grasp of the complexities? So, more and more, we get talking points and five word slogans designed to incite and inflame.

With only an issue left in the run, Aaron Lopresti's art is still improving. This is just a great-looking issue. You plan on hijacking him for another project one day soon?

I really admire what Aaron did on this series and would not hesitate to work with him again.

Though, rather than a group book, I'd love to give him a single character, full power showcase type of thing to sink his teeth into.

And it has to be noted that, not only did he deliver the goods in a big way, he was there every single month except one. That's a track record of professionalism anyone can embrace. 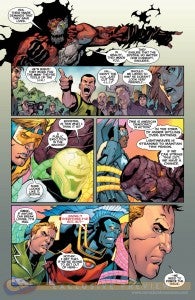 I can't help but feel like using August General is a good way of making the jeopardy seem real; fans will see through the idea that anything really awful might happen to Guy, Booster or Batwing...but Godiva and August General have always seemed like plausible targets.

True. Anyone who doesn't have their own book can definitely be seen as wearing one of those dreaded, red, engineering uniforms.

On that note--will you have time next month to address where the rest of the team is at, in terms of their recovery?

For a bit. #12 got really tight and I simply didn't have room to address everything I wanted to.

Where's Batman during all of this? Did he just decide that Batwing can handle it and that's it, he's done?

With Guy trying to enrage OMAC into action, is this the closest you're ever going to get to writing a Hulk story?

In a way, I suppose so! I actually wanted to be very careful with that but there's no getting around the fact that there's a bit of a beast inside OMAC that the human part of him is trying to contain.

I like the banter in the bar. It seems entirely possible that people really wouldn't be able ot figure out the difference between all the Justice League franchises yet.

True. I know lots of people who don't know the difference between the White Sox and Red Sox, Jets and Giants, or even worse-- San Francisco Giants and New York Giants. 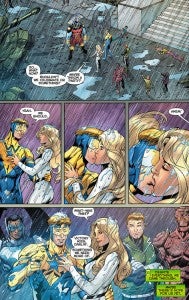 What's the timetable for this entire series, beginning to end? Like two weeks or something?

No, it's a bit longer than that, but not a lot. You can assume there was a lengthy break between issues 5 and 6.

The "payment in full" thing is a very American action movie-friendly catch-phrase. Is that August General acclimating?

With the badguy going down the drain like that...I'm guessing the idea is that we're not totally sure whether we'll see him again?

It seems here that you're setting up the idea of Godiva and Booster as an official couple. Is that something you had hoped to pay off down the line, or just kind of beginning to wrap up your plot threads before you move onto your next project?

It was something I hoped to develop down the road.

For old times' sake, I just have to ask: Is Godiva Rip Hunter's mother?

Oh, c'mon. It's not like we've ever seen Rip with Elasti-hair.

It's very odd to me--and I guess it's indicative of a "true believer"--that Malcolm continues to see the world through his somewhat twisted prism as he's dying, and that his dearest hope isn't that his brother would do better than he did and live to a ripe old age but that he'd throw himself into the same damn war.

It generally seems to me that people who have angry, bitter souls stay that way. Sure, I've seen people change. But once you're as deep as Malcom was, there doesn't seem to be any turning back. Especially in a short amount of time.

What's more frustrating, though, is that Malik is open to it. Will we see him next issue, or is this a case of something that might pay off eventually?