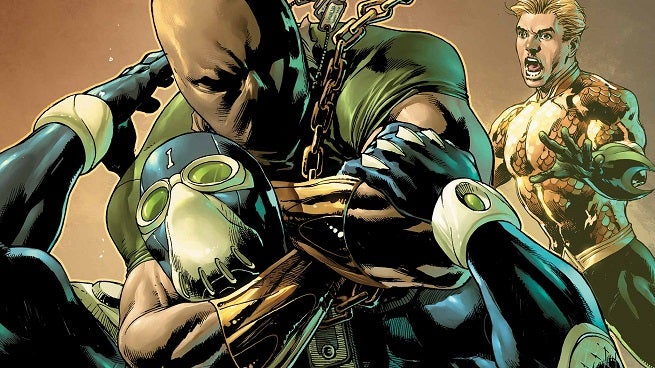 Prisoner-of-War and The Operative took the center stage in this month's issue of Aquaman and the Others, which dealt with the fallout from last month, as KGBeast and Mayhem conspired to take out the heroes from the inside, with the help of one of Prisoner-of-War's spirits...who had been killed by The Operative.

Series writer Dan Jurgens joined us to talk about the series, which is rounding the turn into its final stretch when it ends with March's #11.

Reminder: These postgame interviews contain SPOILERS. If you haven't yet read Aquaman and the Others #9, go buy one and read it along with us. 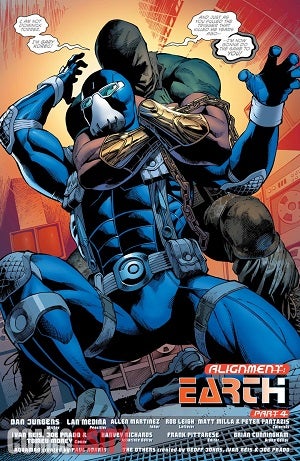 We start out with the battle that we left last time. Was the idea of planting a villain inside of Prisoner-of-War something that you always wanted to explore, or how did that pop up?

That was something I always wanted to explore. I have a a chart that I put together of the various people that Dominick is carrying with him. That's why I started to give them specific names, right from issue #1.

When I was putting the list together it occurred to me that it would make for a cool dynamic if one of them had been a traitor. I didn't know the specific way it would manifest itself and it had no connection to the Operative. That came later.

Quite honestly, Prisoner-Of-War would make for a fascinating study in a solo series. In a group book, there just wasn't enough room to really explore that side of him.

Do you think there's anything they could have done to work better as a unit there? I mean, Ya'Wara breakin up the fight but then continuing to tussle with The Operative...seemed kind of inevitable given the situation.

Part of the message of this team has always been that they aren't a totally unified team.

They don't have a danger room. They don't yell out, "Execute Maneuver A7!" during a fight.

They're a bit more cumbersome than that, which is part of their charm. 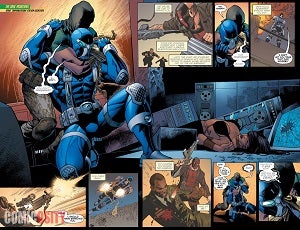 There was a bunch of exposition there at the start of this issue. It came across pretty well, but did you worry about that when writing those pages of dialogue or is it just, sometimes all of that has to fall at once?

I do worry about that.

In all honesty, flashbacks can be terribly cumbersome. But it was the most effective way of revealing what, exactly, happened back in Germany.

That's why I made sure to handle it a different way when I got to Vostok's background.

Did Vostok's background come from Geoff or was that created for the series?

No, I put that together for the series. I think it makes for a really interesting and rather unique background for the character. 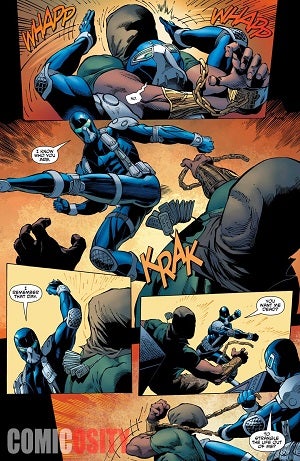 Was Anatoli's "no pampered American could do this.." comment intended to be a wink and a nod to Batman? Because it kind of sounded like it...

No. It was really meant to reveal more about his own past, his view of the old Soviet Union and current view of America.

KGBeast is really, REALLY indoctrinated, isn't he? He didn't even consider the possibility that "the government ruined your life on purpose" wouldn't be a strong motivator to join up?

Yeah, he is indoctrinated. Hook, line and sinker.

For him, the suffering that Vostok experienced forged a harder man. KGBeast sees that as a sign of strength.

This is a bit of a stretch, but it's sort of like looking back at the really tough teacher you had in 10th grade and now saying, "Wow. I'm glad he/she did that to me and made me work. It made me better."

Does Sayeh's ability carry with it any empathic powers that would help her to justify her feelings on Vostok, or is that just her own personality?

Quite honestly, it's a trait that is missing in a lot of heroes. 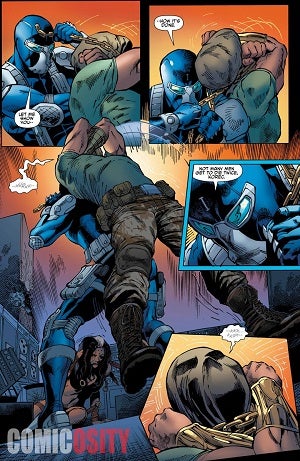 I don't see any bullet wounds on Ya'Wara. Should that be taken as a sign?

So...here's a little game I like to play with time travel stories. If their boat gets nuked, does that mean the Futures End story can't happen?

[ed. note: The Others were seen on a yacht in Futures End: Aquaman and the Others #1]

Or... does it somehow contribute to Futures End?

Oh, the possibilities are endless!

Of course, this is the first time we've talked since the cancellation was announced. How long have you known, and will you have time to wrap everything up that you wanted to do?

I found out while I was scripting #10.

In general, I'll get to wrap up this particular story as intended. It was a bit tough because I'll be wrapping the series at the same time.

Unfortunately, the character exploration I had hoped to do moving forward won't happen. For fans of the book, that's kind of a bummer.

Do you know where the Others will turn up next? Is there a particular status quo you have to leave them with, or is that up to you?

I really don't want to get into the end of the story at this point, nor do I want to address their future.

Not until after the entire series has run its course.

Dan Jurgens Talks Aquaman and the Others #8