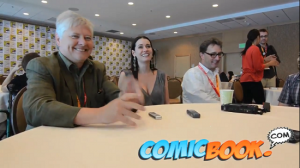 During a press room roundtable at San Diego Comic-Con International last weekend, a number of the creators and stars behind The Hub's Dan Vs. spoke with reporters about the show. A series that's animated half in Flash and half through traditional animation, it has a unique look to it and a small, dedicated fan base who rally behind big-name stars working on a fairly small budget show.

Joining ComicBook.com and a handful of other reporters for a rapid-fire, roundtable conversation following the show's Comic-Con panel and table read were Dave Foley, of The Kids in the Hall and NewsRadio fame; Tom Kenny, best known as the voice of Spongebob Squarepants but also currently appearing on Ultimate Spider-Man for Disney XD and Cartoon Network's Green Lantern: The Animated Series as Dr. Octopus and Salakk, respectively; and Paget Brewster, most familiar to TV audiences as Emily Prentiss on Criminal Minds.

Dan Vs. features Curtis Armstrong--who couldn't make it to Comic-Con due to his filming schedule on another project--as Dan, an exaggerated version of show co-creator Dan Mandel. The character and his best friend Chris (voiced by Foley) go on a new mission of "revenge" each episode, usually overreacting to some perceived slight against Dan. The series was recently renewed for a third season, according to Brewster. That's good for her, because the star has already left her "day job" on Criminal Minds, but she's not particularly worried about being pursued by federal agents anytime soon. 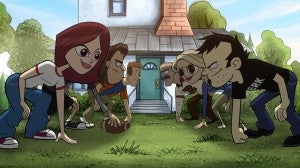 "You'd be fearing [my Dan Vs. character] Elise more," said Brewster of comparisons to Emily Prentiss, "becuase as a cartoon she's capable of greater physical feats of violence. She can pilot a space ship developed by aliens. Pretty much a cartoon ninja female versus a procedural television FBI agent, is going to win in an armwrestling contest." She went on to tell the reporters that when she was hired, the showrunners had no idea that she had already been playing an action role, developing skills that would pay off in Dan Vs. Of course, she also joked that her role on Dan Vs. is "a lot of standing in a booth yelling, 'hi-yah!'."

"I move around a lot" in the booth, added Brewster. "I'm expressive." She said that animation is "kind of pure acting," because all you're expected to do is deliver the line correctly, and you don't have to worry about makeup, lighting or any of the other concerns that actors have to busy themselves with on a live-action set. 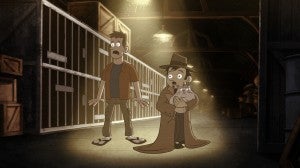 For Dave Foley? Not so much. "My animation process is even lazier than my live-action process," Foley joked. "Live action, I'll sometimes move around. Animation? It's like a dead man sitting there."

For his part, animation veteran Kenny said, "I'm a flailer. They move the furniture out of the way. Sometimes if it's a new guy they bring in a chair and they go, 'no, it's Tom. Bring that out.' I found it freeing when I started doing voice work and quickly lost most of my interest in being on camera at all."

Foley said that his background in sketch comedy, which he did with The Kids in the Hall, certainly helps, as the way Dan Vs. is recorded is that as often as they can, they try to get all of the actors in the same room. "Curtis [Armstrong] is very much the straight man in the show," Foley told reporters, which Kenny hurried to point out was actually an extremely difficult skill to master. Foley agreed. "In The Kids in the Hall, we all loved straight men," the comedian confessed. The pair cited classic comedians like Larry from the Three Stooges and Groucho Marx as all-time great straight men.

Some of Foley's earliest voice work? He shared a story about the film It's Pat, in which he starred in 1994.

"We did the whole movie," Foley said, "And [former Disney CEO] Michael Eisner saw it and couldn't figure out if I was a girl or a guy, and that made him panic because he thought people would think that it was a lesbian movie."

Eisner's solution for the perceived problem? He wanted Foley to come and re-record his lines in a lower, more masculine voice.

"They put me in and I looped every line of dialogue in the movie in exactly the same register," the comedian laughed. "And then Eisner went, 'Oh, good. We fixed the problem.'" He said he wasn't certain how much, if any, of the ADR looping the studio ended up using in the final film, which he said got an unjustly bad rap from the critics upon its release.

Check out all of this and much more in our video of the interview below.