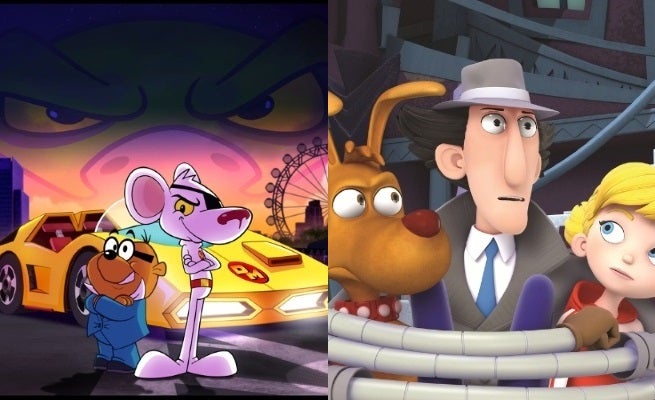 "We've seen great characters and rich storytelling work for a global audience time and time again," said Erik Barmack, Vice President of Global Independent Content. "That's why we're proud to be working with some of the industry's best producers and animators on these shows and we can't wait for kids and families all over the world to get to know these stories."

Here's Netflix's list of new offerings. Check out images from the series in the gallery at the bottom of the page.

The world's greatest superspy, Danger Mouse, returns in dashing, globe-spanning style with a new animated series that features all the classic characters, catchphrases and comedy that made it an 80's cult favorite. With the world once more teetering on the edge of disaster, the small but heroic secret agent is back to thrill a whole new generation of fans as he attempts to overthrow a host of villainous rivals with the help of hapless hamster Penfold and a collection of state-of-the-art gadgetry and vehicles. Originally a loose parody of British spy fiction, this new Danger Mouse series will feature British actor and comedian, Stephen Fry, as Colonel K. Netflix will premiere the show in North America, Latin America, Nordics, Benelux and Japan with all other Netflix territories launching at a later date.

Everyone's favorite bumbling bionic detective, Inspector Gadget, is back in an all new CGI animated series. Dr. Claw has reactivated his global crime syndicate MAD and Inspector Gadget must stop him! Backed up by his niece, Penny, her dog Brain, and an arsenal of high-tech gadgetry, the lovable Gadget fights crime as only he can.  The 26-episode series, produced by DHX Media (TSX: DHX.A, DHX.B), premieres exclusively in the U.S. on Netflix this March and will join the service at a later date in Latin America, the U.K.,Ireland, Benelux, France and the Nordics - after the initial broadcast in each country.

As the new owner of Knickknack Toys, fourteen-year old Jarvis Raines hires a group of friends from school to help him create awesome new toys. Following the teens' comedic day-to-day adventures, this live-action series created by Dan Signer (A.N.T. Farm, Mr. Young) and Howard Nemetz (Mr. Young, The Suite Life of Zack & Cody) and produced by Thunderbird Films, stars Young Artist Awards nominee, Kolton Stewart, and 2015 Canadian Screen Awards nominee, Charlie Storwick.  Netflix will premiere the series in all Netflix territories this year, except in Canada, where it is currently the #1 show on YTV.

Bottersnikes & Gumbles is a fast-paced community comedy series that follows the adventures of three young Gumbles -Tink, Bounce and Willi - as they bounce about and play while avoiding getting tin-canned by their lazy and grumpy neighbors, the Bottersnikes. Developed and adapted from the much loved Bottersnikes & Gumbles books, this new CGI-animated series is created by Cheeky Little, Mighty Nice and CAKE and co-commissioned by Netflix, BBC and Channel 7 Australia. The first 13 episode season will debut exclusively on Netflix around the world in 2016, with the UK and Australia launching at a later date.

SUPER 4, a brand new CGI animated series inspired by PLAYMOBIL®, makes its U.S. premiere in April exclusively on Netflix. SUPER 4 follows four main characters—Alex the Knight, Ruby the Pirate, Agent Gene, and Twinkle the Fairy—  as they explore the distinct islands of their planet, fight bad guys, and have fun along the way.