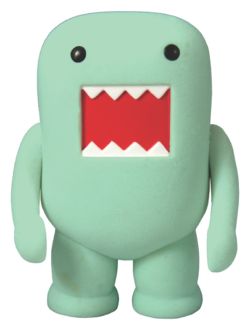 Dark Horse has just made some new announcements about its Domo collectibles. Dark Horse recently launched a blind-box Qee program, which was created in conjunction with Toy2R and features the likeness of Japanese NHK television's mascot, Domo. The Target retail chain will be conducting a new vinyl toy test with the blind-box Qee. The test will target the mass-market audience using new packaging solutions and colorways. These special Qees have been produced in four new, exclusive colors that were previously unavailable. Domos in the new colors are now available in a special blind-box two-pack. The new colors will include solid yellow, solid orange, translucent black and translucent blue. "We have tried to introduce the 'mystery box' genre to a more casual consumer, with an equally weighted ratio of four different colors packed in a blind box and paired with a visible brown Domo Qee," said David Scroggy, who is Dark Horse's vice president of product development. "The customer has an equal shot at one of four possible surprise colors. The blister-carded package for the single Domo Qee choices are something new for both Toy2R and Dark Horse. None of these colors is a part of our regular mystery-box assortment, so we hope this will be of interest to collectors as well as the general public." "Obviously these are new outlets for designer toys, so you must step back and see what works best for them while still capturing the essence of the designer-toy genre," said Raymond Choy, who is Toy2R founder and president. These exclusive Domo releases are available now at select Target locations. A complete list can be found here. Also, Dark Horse announced a color change in the upcoming Dark Horse Deluxe line of 4" flocked Domo vinyls. The previously announced Raging Red color is being changed to Mint Green. The edition size of five hundred pieces will not change.