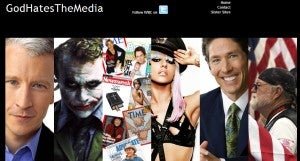 Note: ComicBook.com routinely links back to news sources, but because the Westboro Baptist Church is designated as a hate group by the Southern Poverty Law Center and the Anti-Defamation League, this reporter has elected not to drive traffic to any pages officially associated with the organization.

The Westboro Baptist Church, Rev. Fred Phelps' notorious hate group, has released a video thanking God for the shooter who took 12 lives in a Colorado movie theater during a Friday morning screening of Christopher Nolan's new Batman film The Dark Knight Rises, saying that God sent the gunman "to kill and maim his fellow criminal thugs." The organization's website currently features a graphic of a blood-spattered sign that reads "God sent the shooter."

The church, which is headed by Phelps and consists mainly of members of the Phelps family, regularly picket funerals, including those of soldiers killed in action and victims of terrorist attacks. Most recently, they conducted a "social media protest" of Sage Stallone's private burial.

Essentially, anyplace there's a handful of cameras, the Phelps family might turn up. In 2011, they protested at San Diego Comic-Con International, and (as is more and more common) were met with a colorful counter-protest.

Rumors indicate that Westboro will picket the funerals of shooting victims, although no plans to do so appear on the picket schedule on the group's website as of this writing. Margie Phelps, though, who is one of the most visible of the group's members on social media, did retweet a report that they would do so. Earlier in the feed, she referred to Sunday's planned memorial service for the victims of the shooting as a "squall fest" and suggested that the WBC plans to form a "human wall" at the event.

The WBC apparently has quite a mean-on for Batman in general; both the initial "Thank God" video and tweets by Margie Phelps refer to Nolan as an "idiot" and the organization's "God Hates the Media" website features an image of Heath Ledger's Joker on its landing page.