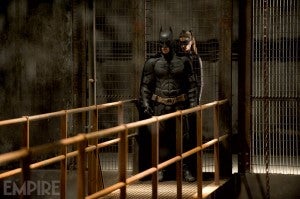 In a new interview with Empire magazine, actor Christian Bale--star of The Dark Knight Rises--told a reporter that he would work on a fourth Batman movie if director Christopher Nolan asked him to.

"My understanding is that this is the last one. I think it's appropriate, I think it's going out at the right time," the star told Empire. "But...if Chris came to me with a script and said, 'You know what? There is another story' then I would love the challenge of making a fourth one work."

That's not a likely scenario, though; while he's aboard Man of Steel and a tentative 2015 Batman film as a consultant, he's made clear for some time that The Dark Knight Rises is his last Batman film as a director, and the Empire interview does little to dispel that, with Nolan essentially saying that it's Bruce Wayne who interests him, and not Batman--and that he considers Bruce Wayne's story finished after his third film.