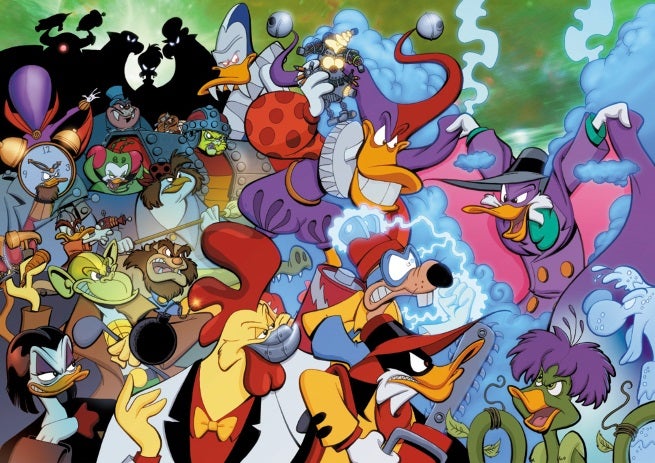 Artist James Silvani shared two pieces of good news for fans of Darkwing Duck yesterday. The first is that the first 16 issues of the Darkwing Duck BOOM! Comics series that Silvani worked on with writer Ian Brill will collected in a single volume Darkwing Duck – The Definitely Dangerous Edition this January. The other good news is that the new collection will lead into a new ongoing comic book series for “The Duck Knight.” Both will be published by Joe Books.

“But the best news of all is this collection will lead right into an all new Darkwing Duck ongoing series coming in 2015 from Joe Books,” Silvani says in his Tumblr post. “Aaron [Sparrow] and I have already begun and will give more details as soon as possible.”

Silvani says that Sparrow, whom he calls “the editor and driving force of the DW comics,” has gone through the original 16-issue BOOM! Series and made correction to fix continuity erros with the Disney Afternoon cartoon series. The comic book took place one year after that series’ end.

Silvani says he was also afforded the opportunity to revisit some of his art for the series, which should make this edition truly definitive.

The book will feature the wrap-around cover seen above, and is now available to order using order number NOV141533 with a retail price $19.99.

Naruto Just Made A Deadly Vow Against Boruto