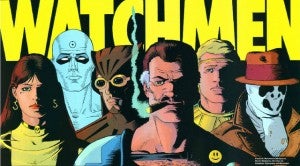 Despite his subdued endorsement of the Before Watchmen prequels back when the series first launched, a new interview with Dave Gibbons suggests that maybe the reason he doesn't get as bent out of shape about adaptations and spinoffs of the classic work as does writer Alan Moore is that he simply doesn't consider them "canon." The artist, who has also consulted on Watchmen video games and the 2009 movie, shared his thoughts: "As far as I'm concerned, what Alan and I did was the Watchmen graphic novel and a couple of illustrations that came out at the same time," Gibbons told Eurogamer during a recent, wide-ranging interview. "Everything else - the movie, the game, the prequels - are really not canon. They're subsidiary. They're not really Watchmen. They're just something different." The prequel series have been extremely controversial, in no small part because original series writer Alan Moore repeatedly blasted the project in the press. J. Michael Straczynski, who writes two of the miniseries for DC Comics, has responded by repeatedly making controversial statements about Moore and other creators involved with the project, including Darwyn Cooke and Len Wein, have been similarly dismissive of the writer's concerns. He compared the process of world-building in Watchmen to something that he does now: video game design. The objective, he says, is to make the place somewhere that a newcomer would want to spend a lot of time. "With Watchmen, the world we set up there was as much a character in it, in that how that world was different than the real world, as any of the fictional characters in it," said Gibbons. "Just as we're finding now, if you come up with a compelling enough imaginary world, lots of people will want to play in it or tell stories about it." You can check out video of the conversation below, via Bleeding Cool.

Dave Gibbons: Before Watchmen is "Not Really Watchmen"