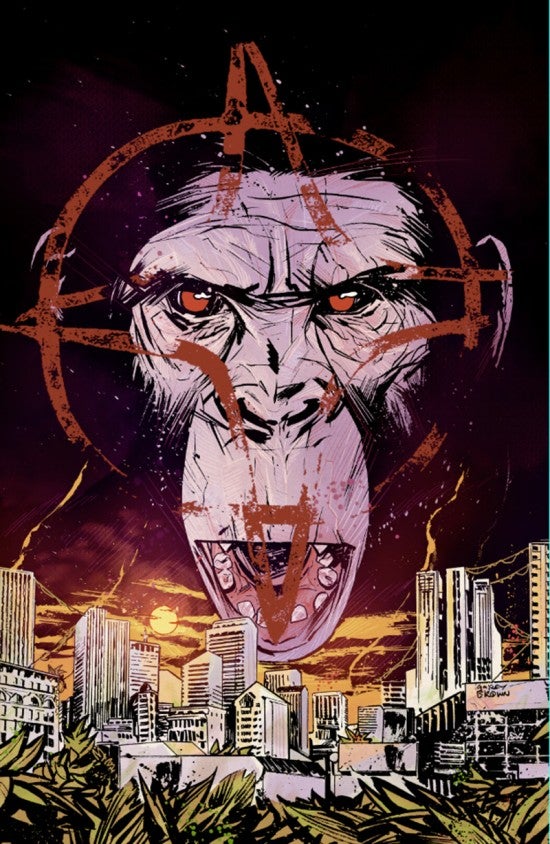 Dawn of the Planet of the Apes cast members Andy Serkis, Gary Oldman and Keri Russell, along with director Matt Reeves, will make an exclusive signing appearance at the BOOM! Studios booth during WonderCon in Anaheim, California, on Saturday, April 19, the publisher announced today.

BOOM! Studios is the official publisher of Planet of the Apes comics, part of a broad arrangement they have with 20th Century Fox, who are distributing the film, due out on July 11.

Limited-edition WonderCon exclusive Dawn of the Planet of the Apes prints illustrated by Garry Brown (who works on BOOM!'s popular Sons of Anarchy comic) will be available for purchase for $20, and the cast will be available to sign them from 2:30-3 p.m. on Saturday, April 19, at the BOOM! Studios booth, #319, at the Anaheim Convention Center. The signing will be ticketed and a print purchase is required for the signing.

Dawn of the Planet of the Apes is about a growing nation of genetically-evolved apes led by Caesar (first introduced in 2011's Rise of the Planet of the Apes) that is threatened by a band of human survivors of the devastating virus unleashed a decade earlier. They reach a fragile peace, but it proves short-lived, as both sides are brought to the brink of a war that will determine who will emerge as Earth’s dominant species.

With the movie coming out shortly before San Diego Comic Con International in July, expect a number of high-profile appearances at smaller cons between now and then to help increase the film's visibility without the boost from a packed Hall H panel and the positive buzz that generally flows from them.

Dawn of the Planet of the Apes Cast Coming to WonderCon With BOOM! Studios

Unopened Box of Original Pokemon TCG Cards Sells for Over $400,000

Resident Evil: You Can Now Own Your Own Claire Redfield Jacket

Star Wars: Light of the Jedi Writer Reveals What's Next for the High Republic