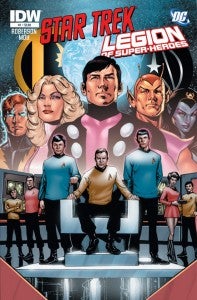 More big news continues to come out of this year's Comic-Con, and IDW has taken the stage to announce that they will be teaming up with DC Comics for a six-issue series that will see the cast of the original Star Trek television series team up with DC's Legion of Superheroes for an adventure in the 23rd century. Captain Kirk, Spock, Bones and the rest of the crew of the Starship Enterprise will meet up with Saturn Girl, Lightening Lad, Cosmic Boy and others for some interesting clashes with enemies from both series' universes. The announcement is the latest in a series of several cross-publisher projects announced over the past few weeks.

Fans should expect to see the long-time Enterprise nemesis the Klingons make an appearance, as well as the hated Borg. The series is set to begin this October and will be written by Chris Robinson (iZombie) and illustrated by Jeffrey and Phillip Moy. If you're boldly going to check out this series, be sure to tell us what you think!!