The Internet has exploded a little bit in the past few days, since DC Comics announced 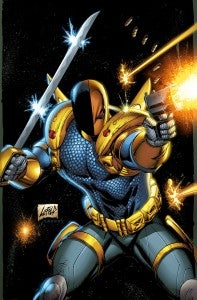 that Rob Liefeld would take over as the writer-artist on Deathstroke, as well as plotting The Savage Hawkman and Grifter beginning with issue 9.

According to Bleeding Cool, DC Co-Publisher Dan DiDio told a fan on his Facebook page today that Liefeld would have co-writers on the latter books, but did not specify who those writers might be beyond implying that it will not be the current creative teams. DiDio pointed out to the fan that Kyle Higgins remains on Nightwing and Tony Daniel on Detective Comics, but Grifter writer Nathan Edmonson seems to be done at DC for now, and Joe Bennett, the artist on Deathstroke, remains unaccounted for.

Eddie Berganza, DC Entertainment Executive Editor, said on DC's blog The Source, “Rob’s always been seen as edgy, both within the comic book industry and by his fans. That’s a great vibe to bring to these particular books. We really want to push boundaries, and Rob’s the guy to do it.”

"Edgy" is one word for the controversial figure, who tends to sell well but draws a lot of ire from critics, as well as elements of the fan community (even in the story linked above, Bleeding Cool called Liefeld's work "childish"). Liefeld was more active in 2011 than he had been in a long time, leaving behind the deadline problems for which he was once notorious and completing not only DC's recently-canceled Hawk & Dove, but Image's The Infinite with writer Robert Kirkman, on schedule and seeing the announcement that his Extreme imprint at Image Comics would return in 2012.

At The Source, Liefeld spoke briefly on each of the three titles he's working on, as well as providing fans with a first look at the cover to Deathstroke #9.

“Deathstroke is tasked with the greatest challenge of his life, taking on the most dangerous prey in the galaxy…LOBO!” said Liefeld. “The galactic criminal has escaped from his terrestrial prison where he has been housed for years. He is free and ready to settle the score! And what is the secret of the OMEGAs and what role will they play in the deadly showdown?”

The cosmic take on Deathstroke is mirrored by The Savage Hawkmanwhich, according to Liefeld, will explore the Thanagarian connection to Hawkman's new 52 backstory. The wisdom of introducing a complicating element to Hawkman is somewhat questionable given the challenges that's presented to DC and its writers in the past, but Liefeld's comments seem to suggest that substantial thought has been given to presenting his disparate origins as a coherent whole: “[Hawkman] wields the powerful Nth metal and, as Carter Hall is about to find out, it is a weapon coveted by the deadliest players in a game that plays across the ages,” said Liefeld. “New enemies and allies emerge as Carter Hall travels across the globe in pursuit of the answers to his heritage and the Thanagarian connection.”

Grifter, whose battle against the Daemonites has already been teased by DC as spilling over into Voodoo, Superman and the outgoing Blackhawks among others, will also see some space opera, and one has to wonder if giving Liefeld (or any single writer) reign over these particular titles at this particular time is an effort to give some of DC's cosmic heroes a single vision, not unlike what Dan Abnett and Andy Lanning were able to produce to substantial critical acclaim over at Marvel.

“Grifter has been targeted for extermination!" Liefeld teased. "The time is now for Grifter to embrace his destiny and lead the insurgence against the impending Daemonite threat. He has spent his life running from his true destiny, but he must embrace his role in the coming conflict or worlds will fall. Familiar faces emerge warning Grifter that nothing can prepare him for what is coming. His true destiny is revealed and a reluctant hero emerges to lead a strike force of human allies that will deliver the ultimate DEATHBLOW to the impending invasion.”

Obviously, in addition to Lobo and the Thanagarians, Liefeld here is suggesting the first appearance in the New 52 of Deathblow, a WildStorm character last seen in a 2008 miniseries written by Wonder Woman scribe Brian Azzarello and drawn by Carlos D'Anda, the concept artist for Batman: Arkham Asylum and Batman: Arkham City, who DC announced on Friday would be filling in for Jim Lee on Justice League #8.