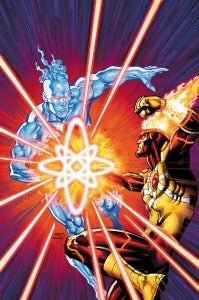 , The Fury of the Firestorm the Nuclear Man, The Savage Hawkman, Ravagers, Sword of Sorcery and Team 7 have all been cancelled, with their final issues set to ship in May. Deathstroke and Team 7 writer Justin Jordan, best known for his Luther Strode books at Image Comics, will take on Superboy going forward, while Hawkman and Amethyst will be seen in Justice League of America and Justice League Dark, respectively. Justice League teased Firestorm as a reserve member last month, which stands to reason since the character also appeared in teaser images for the series before the New 52 launched. Sword of Sorcery writer Christy Marx is headed over to Birds of Prey. "There's a variety of reasons for when we unfortunately have to cancel a book," DC's Editor-in-Chief Bob Harras told CBR. "The main focus on this, and this is the big picture, is we try to take a look at it as, these characters will not go away. Even though, yes, "Savage Hawkman" is being cancelled, you'll be seeing a lot of him in "Justice League Of America." We have also plans for Deathstroke going forward. So even though, as I said, the monthly title is going away, the characters are still going to be very important to the ongoing storyline of the New 52." Three of the titles--Deathstroke, Firestorm and Hawkman--were part of the initial New 52 launch in September 2011, while Ravagers, Sword of Sorcery and Team 7 have all been added along the way. Ravagers and Team 7 are the third and fourth cancelled titles starring characters who originated in DC Co-Publisher Jim Lee's WildStorm imprint (after Voodoo and Grifter). Another WildStorm title, Stormwatch, is undergoing a major facelift in April, with veteran writer/artist Jim Starlin taking over as the series writer. While DC has typically kept 52 ongoing, monthly books in print since the launch of the New 52, it's hard to say what might be coming up to replace these titles, or whether that strategy will be scrapped. "Wait, you mean that wonderfully well promoted and marketed Savage Hawkman comic was CANCELLED??? shocking! Shadow Thief didn't save it?? Look for a Red Robin,Martian Manhunter, Superman/Batman,DC Comics Presents and Brave and Bold to enter the 52 arena sooner than later," former Deathstroke and Hawkman writer Rob Liefeld recently tweeted..