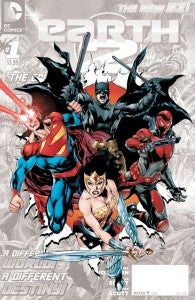 DC Comics Editor-In-Chief Bob Harras and Editorial Director Bobbie Chase told CBR today during their regularly-scheduled "B&B" interview that the publisher is planning to launch a second comic set in the world of Earth 2. "What James [Robinson] and Nicola [Scott] have built, it's a world, quite literally," Harras said. "They've got so many amazing storylines there and you're going to see some intriguing twists coming up in the Annual. We are thinking about, 'What can we do next with Earth 2?'" Chase and Harras didn't go so far as to say that they had a specific title or creative team planned, or a timetable, though, telling the fan who asked the question (and by extension CBR) to be patient and wait to see how the story plays out. The publisher has been developing new characters in the world, introducing an Earth 2 Batman with some fanfare recently and planning a New Gods crossover with Mr. Miracle appearing in this month's issue.