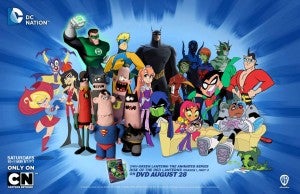 Cartoon Network has announced that the fan-favorite DC Nation programming block, which disappeared off the air back in October with no explanation from any of the parties involved, will return to the air on January 5. The network has confirmed the return of Green Lantern: The Animated Series, Young Justice: Invasion and the interstitial DC superhero shorts that run between them. "Steam Lantern" for Green Lantern: The Animated Series and "Before the Dawn" for Young Justice: Invasion are the episodes that are scheduled to air this weekend, as was announced shortly after the block went on hiatus. Certainly the lack of a Batman or Superman series to anchor the block has been a bit inexplicable, it won't last. A CGI-animated series titled Beware the Batman will launch this spring, after being delayed for "retooling" following the mass shooting at a Colorado movie theater where The Dark Knight Rises was premiering in July. Speculation that neither the ratings nor the merchandising income were reaching Cartoon Network's expectations of the block, leading to the hiatus, but later reports suggested it was simply a matter of extra production time needed to create the popular animated shorts.