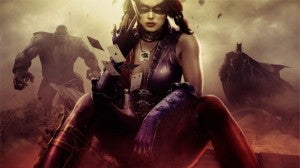 Those looking more for a video game fix than strictly comic books at this year's Comic-Con will not be disappointed, as there is plenty for them.  One of the big draws at the show yesterday was at the DC Comics booth, where fans could line up to take part in playing a demo round from the already highly-anticipated 2013 game Injustice: Gods Among Us.  I was fortunate enough to be in the group who took part yesterday, and even though fighting games are not my first go-to as a video game player, all I can say is that I was blown away by the gameplay and so much more in just that short amount of time I spent playing. DC was using the opportunity to showcase the eight characters that have been announced so far for the game.  Players could choose between Superman, Solomon Grundy, Wonder Woman, Batman, the Flash, Nightwing, Harley Quinn, or Cyborg.  Stepping up for my turn, I chose Harley Quinn, one of the more "gadget-centric" characters being used there.  Playing on the XBox 360 for the demo was a little different for me, as I have a PS3 at home, but it didn't take too long to get acclimated to the controls, which are pretty straight forward for the game play.  There are three main attack buttons, light, medium and heavy, and then one button is for your "trick shot", a special move or gimmick that your character can perform.  I faced off against someone playing as Superman, and it was clear that some of the characters have much more effective ranged attacks than others.  Superman's heat vision is pretty devastating, and he can get you from far away or close up, which is very real in terms of how it would be in the comics. With Harley Quinn, her pistols are her main weapon, and she has some pretty interesting twists and turns with her body that can make her tricky to handle. One of the biggest pieces of the game play I found pretty cool were the super moves that each character has, which are acquired after building up energy from attacks.  Unleashing these brings up special close-up graphics on the character as they execute them.  In Harley's case it's a giant mallet attack followed by an exploding pie.  Superman can SLUG you into the next room: literally!  Even though it sent me flying, seeing a character get punched so hard they go through walls and down into another part of the Fortress of Solitude is pretty cool.  They even take damage along the way.  The environment can also be used in the game, as there are some traps and tricks that can be executed by luring your opponent into certain areas. One of the nicest pieces of the game play is how long it takes you to defeat your opponent.  One of my biggest complaints about fighting games in general is that it can be over relatively quickly.  Not here.  You exhaust not one but two health meters before you lose the battle, which makes for extended gameplay where you can perform your special moves two or three times as possible.  In the end I wound up defeating my fellow player, and I have to say that I will definitely be picking up this game when it comes out.  Based on the factors here it will become one of THE big games for next year.

DC Offers Demo Play of Injustice: Gods Among Us at Comic-Con. It's Amazing!