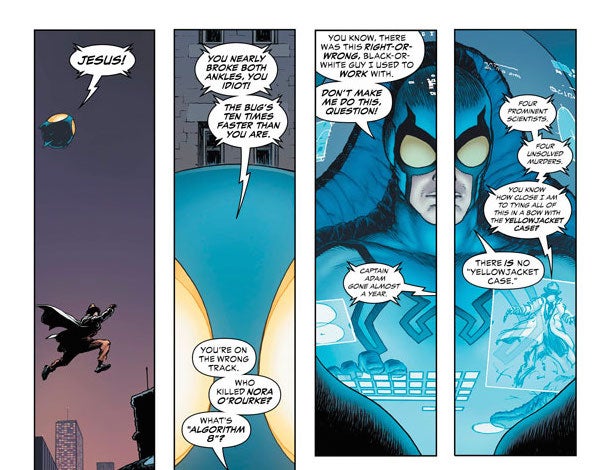 You could equate waiting for a Grant Morrison and Frank Quitely collaboration to waiting for Christmas, but really, that's a disservice to the creative duo. Christmas comes every year, but fans never know when to expect another entry from team behind "All-Star Superman," "We3," and "Batman & Robin."

Fortunately, the wait for another Morrison and Quietly holiday is finally over with "The Multiversity: Pax Americana #1." The latest installment in Morrison's multiverse odyssey, which hits comic shops this Wednesday, takes readers to the familiar planes of Earth 4: Home of Charlton Comics originals like The Question, Blue Beetle, and Captain Atom. In "Pax Americana," Morrison and Quietly explore the characters' world independently of the greater DC Universe for the first time in decades, showing readers what the Charlton Universe might look like if DC had not acquired the characters in 1983. (Though to be fair, Alan Moore and Dave Gibbons' Watchmen Universe is a thinly-veiled spin on the Charlton characters).

The issue's first few pages are now available to preview (via Entertainment Weekly). It should give you plenty of talking points when your boss asks why you billed Wednesday as a "paid holiday."