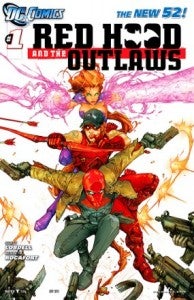 This past week, DC rolled out quite a few of their new "team" books as part of the 52 relaunch, and the groups cover a span of the familiar and the new, all designed to keep old readers and intrigue new ones with different groups paired with the traditional. For example, this week's offering of the new Red Hood and the Outlaws with the familiar Green Lantern Corps. Let us not forget Legion of Super-Heroes alongside a newly designed and led Birds of Prey. The results are pretty mixed, and so far, few of the team books have been all that great. My favorite so far has pretty much been Justice League International. Even in Justice League of America #1, the team wasn't even fully formed yet, so we really can't count that one at this time. With a trail of mixed results so far, the four team books covered here run quite the gamut of effectiveness.

Red Hood and the Outlaws is up first, and this title gets off on some awkward footing. The three characters we see the most of in this issue, Red Hood, Speedy (Roy Harper) and Starfire, seem to have varying degrees of one-dimensionality, but Starfire takes the cake. It's amazing how a character with as long and as rich a history as this alien from the planet Tamaran has been reduced to little more here than a powerful "pair of 38s" as Jason Todd calls her. It's a bit of a groaner of a joke that doesn't redeem the value of the series any, as Starfire's "38s" are well on display. The overly simple sexuality felt off-putting, and I would have thought the same thing had the brainless "sex character" been a male. There's a lot of action to the series, and the opening sequence involving Harper getting busted out of prison is kinda cool, but overall this issue felt very vague and flat for an opening issue of what could be a very powerful super-team. There's no thought to Starfire, Jason Todd mumbles about some shadowy and vague villains that we have no clue about, and the whole thing just reads as the opening credits of an action show. Kenneth Rocafort's art is great, but otherwise, nothing feels too bold and new so far. Grade: D+ 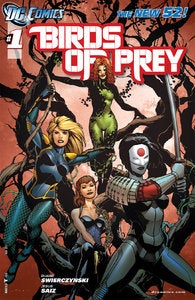 Another new configuration takes off in Birds of Prey #1, with Black Canary a wanted criminal for a murder that she's desperately trying to disprove her responsibility for. There's a nice ring of the familiar with this book, especially between Black Canary and fellow team member Starling, which feels reminiscent of the way Zinda of the WWII Blackhawks would have a devil may care attitude while in the midst of battle. I'm sure the mystery of the murder Dinah references here will be fleshed out further in the series, and overall the issue felt very immediately like its own and not a shadow of former runs on Birds of Prey. A brief, tense appearance by Barbara Gordon feels a bit sad, considering the integral role the character played in the previous incarnation of the series. The issue focuses mainly on a reporter who is investigating rumors of a team of super women who might be criminals. All this leads to the rollicking action sequence when the reporter is essentially caught in a crossfire between the Birds and a shadow organization. This first issue ends on a good cliffhanger, and it feels like a good staging book for its next issue. Grade: B+ 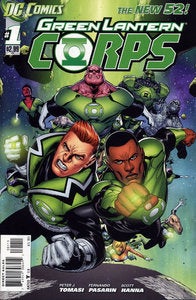 While over in the pages of Green Lantern Corps #1, there's definitely a rich, dense story right away. A mysterious, unseen force is making brutal work of some Green Lanterns, and along the way other life forms are not spared in its reach and destruction. The interplay between John Stewart and Guy Gardener feels right and their respective introductions as part of this group feels real, especially the way we get to see Stewart as a highly ethical man who's not about using some pretty scary techniques to get his point across. Gardener seems a little more level-headed than we've seen him in previous series and runs, but hey, it IS only issue #1. As I was reading I kept feeling that the series was going on for awhile, which made the story feel very developed and intricate right away. Writer Peter J. Tomasi and artist Fernando Pasarin craft a story that uses much of the page, giving narrative detail in each panel as well as illustration. The characters are believable, and for a book that promises a lot of alien presence in its storytelling is no small thing. This one looks to have some legs to it. Grade: A-

Rounding out the list here is Legion of Super-Heroes #1. A large cast of characters has always been one of the hallmarks of this team in more recent years, and that's certainly at work in this issue. Several characters have handy little identity bubbles placed next to them in order to give the reader a context for them. It's helpful, but you have to wonder how juggling all of these characters will be for writer Paul Levitz in the future. This book's release give a little bit of clarity and "ohhhhhh...NOW I get it" to last week's Legion Lost, which felt like a thoroughly confusing affair for all involved. There are a couple of links to that book here, but this book has a clearer sense of what's going on and what's happening, which leads to much smoother storytelling. Several familiar faces such as Mon-El and Brainiac 5 appear, and they do quite well at helping to anchor the team. Many of the members get some face time with the reader, but there are patches where it almost feels like Levitz is trying too hard to give each character a moment. Francis Portela does a nice job on artwork, as it lends a youthful frame to the series and its members, despite its years of history. Solid issue. Grade: B