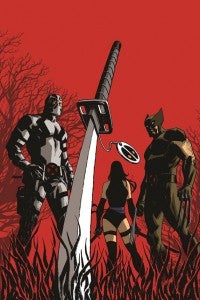 Marvel Comics has released a cover image for February's Deadpool #50 to reporters via an e-mail with the subject line "DEAD at 50!" The image, which shows X-characters loitering around Deadpool's sword as it's stuck in the ground, was drawn by Dave Johnson and will serve as the cover to the series' fiftieth issue and the first part of the "Dead" storyline, in which the publisher says "Wade Wilson makes a monumental decision that will forever change who he is."

Deadpool, of course, is one of those characters who is virtually immortal by virtue of his powers. Like DC's Lobo, he's also often played for laughs and takes massive, improbable amounts of physical damage in stories, coming out no worse for wear on the other side. The possibility of actually killing that character raises some interesting questions in terms of how the characters around him would react--which is part of what Marvel promises "Dead" will play with. But can a character whose own death issue is teased using the phrase "Following the epic battle with his former body parts gone rogue," ever really die?

Ever since Marvel talked about killing a major character every quarter to drive revenue and increase mainstream media coverage, many fans have been a bit suspicious of any stories that smell like "Death of..." tales. The character whose apparent death kicked off the last round of successful promotion in that vein was the Human Torch, whose death in Fantastic Four #587 was recently undone after exactly a year of exploring other storytelling possibilities when he resurfaced in Fantastic Four #600. That cynical and clever fans had deduced before the character was pronounced dead that exactly this would happen, didn't dull initial sales of the death but seems to have muted some enthusiasm for the character's return.

Deadpool is Dead at 50, Teases Marvel