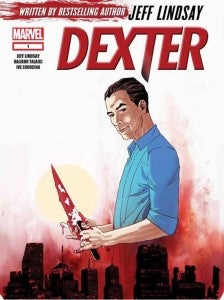 It's been a long time since Marvel Comics announced that they would be publishing a Dexter comic book by Jeff Lindsay, who is the author of Darkly Dreaming Dexter. His novels were the inspiration for Showtime's Dexter TV series. "Marvel Comics has always been a place where I felt at home. It has been a very important part of my life, and has always been a wellspring of creative and relevant ideas," said Jeff Lindsay. "I feel like I'm coming home. It is a huge thrill for me to bring Dexter into this very special pantheon." According to USA Today, the long-awaited five-issue Dexter miniseries will finally be released in February 2013. As could be expected, Dexter will be a very gruesome comic book series and will carry a parental advisory warning. The comic series will follow Dexter Morgan as he takes out all sorts of criminals as Miami's secret vigilante. Dexter is motivated by an inner voice, which he refers to as his "Dark Passenger." In the comic, Dexter will face such challenges as a rookie serial killer called the "Skid Row Slasher" and attending his high school reunion. While Jeff Lindsay himself will be writing the series, the artwork will be by Dalibor Talajic. "Dexter is a perfect fit for comics, bringing an exciting cast of layered characters together with gripping, visually arresting stories " said Ruwan Jayatilleke, Associate Publisher & SVP, Marvel Entertainment. "It's an honor for Marvel to work with a lauded author such as Jeff Lindsay, whose ability to both horrify and move an audience is unparalleled. Fans of Dexter will be thrilled by this new story that fits seamlessly into the world they already know."