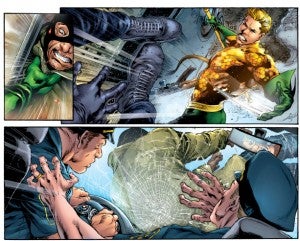 One of my favorite blogs is Andrew Weiss's Armagideon Time, specifically for its "Nobody's Favorites" feature. This particular feature talks about superheroes that, usually, couldn't even have seemed like a good idea at the time. Its derision is good-natured, with very little of the vitriol and meanness directed at the creators that you see on many similar blogs, but the feature is funny and well-written...and even when I occasionally see a character listed who I genuinely like, the reality of it is he's just about always right about them being "nobody's favorites."

So--imagine my surprise when I saw that, as part of DC's 52 quotes campaign using lines from upcoming comics to promote them, I came across this. Though Johns's script apparently attributes it to an anonymous blogger, the wording of the question asked, "How does it feel to be nobody's favorite superhero?", immediately struck me. Whether Johns is aware of the feature himself is unclear, although I suspect that he is and this is a bit of a private joke in the script; the feature is fairly popular and I first became aware of it when it was referenced by either Blog@Newsarama or Bleeding Cool.

And if it's a coincidence--well, that's even cooler.

Did Geoff Johns Just Call Out A Specific Blogger?