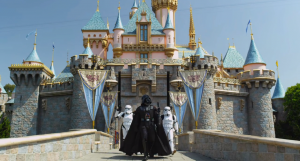 Hot on the heels of yesterday's announcement that the Walt Disney Company had acquired Lucasfilm with an eye toward further developing the Star Wars property through film, television and more, the very first official footage has emerged using Darth Vader and other iconic Star Wars characters...

The question, of course, is what's Darth Vader going to do now that he's part of the Disney family. And the answer is...well, you know.

Apparently they weren't kidding about incorporating the Star Wars property into the Disney parks.

Naruto Just Made A Deadly Vow Against Boruto