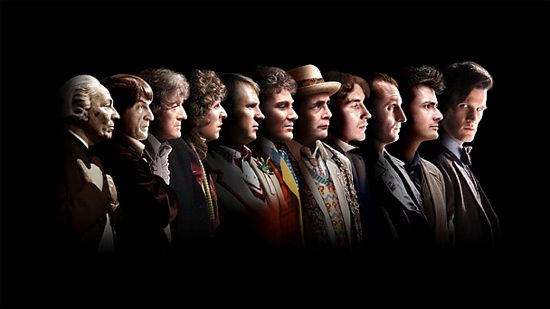 The BBC has announced that they will be releasing tonight a teaser trailer celebrating the 50th Anniversary of Doctor Who. The trailer will air on  BBC One on Saturday, October 19 at approximately 8:20 PM (between Strictly Come Dancing and Atlantis). The trailer will be released online immediately after its BBC One premiere. The BBC also revealed an exclusive image to promote the new trailer. The image features the 11 Doctors. Here's the BBC description of the trailer: Travelling through time fans will be taken on a journey from the very beginning using state of the art technology.  The special trailer is set to show all of the Doctors as they first appeared on screen, including William Hartnell in high res color for the very first time, as celebrations ramp up to the 23 November. A huge moment for the BBC, the 50th celebrations will culminate with the special episode, 'The Day of the Doctor', starring Matt Smith, David Tennant and Jenna Coleman with Billie Piper and John Hurt.  A whole range of shows have also been commissioned across TV and radio to mark the anniversary. The Doctor Who 50th Anniversary trailer will be a minuted long, but it is said that it does not include any actual footage of the 50th anniversary episode.

Watch: The Rock Offers to Give Peyton Manning a Rock Bottom During Monday Night Football