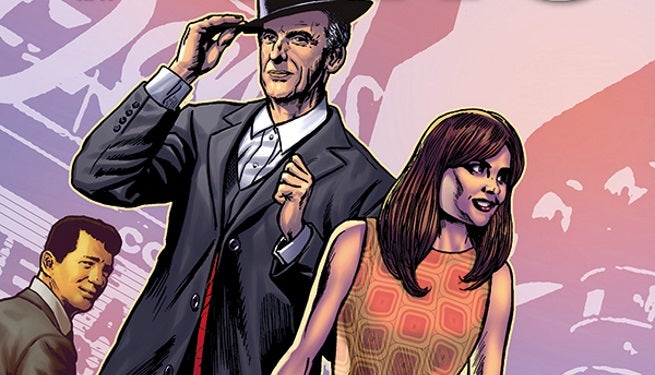 The Doctor is known for his connections to famous figures from history, and he’s about to make a few more. The famous “Rat Pack” will guest star in a brand new story, featuring Peter Capaldi’s Twelfth Doctor and his companion, Clara Oswald, beginning in Doctor Who: The Twelfth Doctor #9, from Titan Comcis.

The new story, “Gangland,” sees the Doctor forced to ally himself with gangsters on the 1960s Vegas strip to combat a much more powerful threat. In the process, he and Clara will rub shoulders with Frank Sinatra, Dean Martin, and Sammy Davis Jr.

Doctor Who: The Twelfth Doctor #9 is written by Robbie Morrison (Spider-Man) and features interior and cover art by Brian Williamson (Torchwood). The issue goes on sale June 3.

A brand-new story begins, as the Doctor and Clara are forced to ally with gangsters on the Vegas strip to combat an even more terrifying foe!

Will the Doctor's morals prove as alien as the unearthly invaders – or can he triumph without compromise... in 'GANGLAND'?

Doctor Who Meets The Rat Pack In New "Gangland" Story