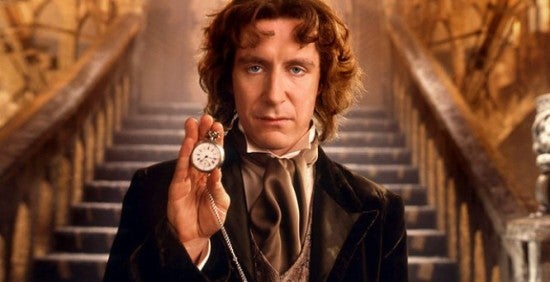 Paul McGann's Eighth Doctor returns to action in Doctor Who: The Night of the Doctor, a six-minute webisode released online today ahead of next week's Fiftieth Anniversary special Day of the Doctor.

McGann played the character in the 1996 Doctor Who TV movie as well as other tie-ins like audiobooks and radio plays.

And, yes, what appears to be a major revelation about the nature of John Hurt's character in Day of the Doctor can be found below. Check it out at your own risk, although this is apparently the way the BBC and Stephen Moffat have elected to reveal.

The Bringer of Darkness, the Oncoming Storm, the Doctor, the Warrior - A Time Lord! The 50th Anniversary features Matt Smith, David Tennant and a mysterious incarnation played by John Hurt. Only one appears in the mini episode, The Night of the Doctor. But which? 23.11.13 #SaveTheDay.

Doctor Who: Night of the Doctor Features the Return of Paul McGann's Eighth Doctor

Funko Pop WonderCon 2021: Here's Where to Get All of the Virtual Con Exclusives