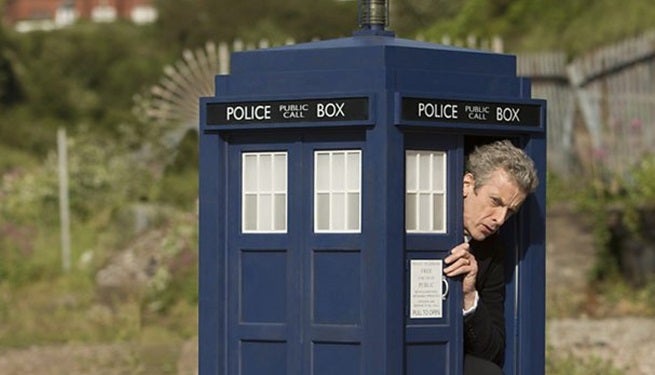 The episode opens with a man on the phone. He's talking about the buzzing that he's hearing all over the place, some kind of swarm. He disappears and leaves the phone hanging off the hook. His face appears on the wall in the same room.

Clara is packing up her stuff to get off the TARDIS, noting that Danny is getting a bit territorial. The Doctor says they've returned to the same place and same time-ish that they left, noting strange readings. Clara notices that the door out of the TARDIS has shrunk considerably. They exit and find that the outside of the TARDIS has shrunk entirely. Clara notices that they're in Bristol, 120 miles off from where they should be. The Doctor says they can't take the TARDIS anywhere else until he figures out what is going on with it. Clara decides to take a look around.

A graffiti artist is being forced to paint over his own work as part of community service. Clara runs into him. There's a series of people looking inward in the walls under and overpass.

Clara calls back to The Doctor to tell him about a series of missing people. She finds that the TARDIS has shrunk even more, and may be too small to get out of. The Doctor passes Clara his screwdriver and psychic paper, as well as communicator that lets the Doctor see through her eyes. She runs into the graffiti artist, Rigsy, again and tells him she's "The Doctor" Oswald.

He brings her to the room from the opening, explaining that the man went missing in a locked room with no windows. Clara suggests that the man might be shrunk down. Rigsy gets scared and goes to leave. She pulls out the miniature TARDIS and has The Doctor open the door to show him that she's not crazy. The Doctor picks up some readings and Clara and Rigsy leave.

The Doctor needs more information, and sends Clara and Rigsy to other places where people disappeared. She uses psychic paper to pose as MI:5 to a police officer. The Doctor passes Clara a sledgehammer to start searching in the walls. The police officer goes into another room and starts hearing sounds, then finds the floor becoming wavy and is sucked down. The Doctor says the TARDIS should be able to detect anything in the known universe, and then realizes these creatures may not be of this universe. He notices a mural of a nervous system on the wall, and notices that the mural in the previous room was human skin. Someone is trying to understand three dimensional beings. The beings begin flattening things in the room. Clara and Rigsy climb onto a hanging chair in the room. Danny Pink calls. They see the creatures climbing up the walls. Clara lies and tells Danny she's fine, then uses the sonic screwdriver to swing them out the window.

The Doctor goes on about how these creatures come from a universe with only two dimensions. The Doctor also calls out Clara for lying to him and not telling Danny that she's still travelling on the TARDIS. The communicator starts acting funny, so she stops to sonic it.

Rigsy notices his community service group going to paint over the people in the overpass. The Doctor sees and realizes they're the missing people. Clara tries to use the psychic paper to trick the man in charge, but he has too much of a lack of imagination to buy it. Turns out the two dimensional beings were using the people as camouflage and come off the walls.

The group hides in a large garage. Clara uses some Doctor attitude to take leadership of the group. The Doctor theorizes that the two dimensional beings tried to communicate and no one answered. They may not realize that three dimensional beings are sentient. The Doctor translates some of their sounds: 55, the number on the coat of one of the men. They then say 22, the number on George. George gets flattened. The rest run for a tunnel.

The Doctor creates a device to restore three dimensions to some objects. Suddenly, a giant hand appears from the walls and pulls one of the workers away. Clara uses the 2-Dis to unflatten a door hanle so they can get through. The creatures take three dimensional, humanoid form and chase, with the ability now to restore dimensions. The community service leader knocks the TARDIS out of Clara's hands and down a shaft onto the train lines. The Doctor sticks his hand out of the TARDIS door to crawl to safety, but the oncoming train's vibrations knock the TARDIS back onto the track.

The Train comes to a stop. The TARDIS goes into siege mode, with no way in or out. The Doctor says there's not enough power to turn it off. Rigsy jumps on the train and begins driving it. Clara uses a headband to rig the train so that he doesn't need to stay. The creatures flatten the train and begin forming out of the ground. Clara finds the TARDIS as a cube on the ground.

Clara pulls out a large poster and is going to have Rigsy graffiti something onto it. The creatures are coming for them. They start pumping their energy into what they think is a door, but is actually just Rigsby art, and instaed into the TARDIS> The TARDIS is restored.

The Doctor says he tried to reach out and communicate with the creatures, but they're determined to play monsters. He takes the sonic screwdriver and uses it to banish the creatures, whom he names The Boneless.

The TARDIS drops off the survivors. The Doctor compliments Rigsby's art for saving the world. Clara wants to hear the Doctor say she did good. The Doctor says she was an exceptional Doctor, but goodness had nothing to do with it.