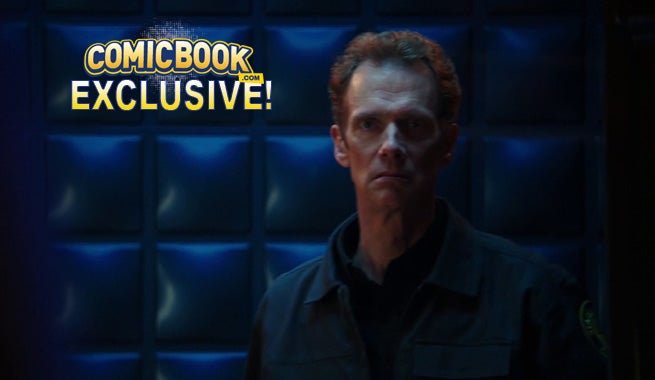 Does a character dying in a comic book show or movie really mean anything these days? Especially if you don't see them actually die?!

Well, if you're a skeptic when you don't see a body, Doug Jones agrees with you. Jones recently played the supervillain Deathbolt in a two-episode stint on Arrow and The Flash and like many of us, believes it may not be over for his character, he told us exclusively.

On the topic of comics, you got to appear as Deathbolt on Arrow and The Flash. How do you manage to play aliens on Falling Skies and The Strain, then jump to a super villain on totally different shows? How do you pull that off?

I think the key words were "Pull that off." I'd pulled of the rubber mask and on Arrow and Flash I got to use my own face. That actually was a bit of a luxury for me to be Doug Jones looking - with after effects thrown in where my eyes light up and throw plasma bolts at people. Well, Deathbolts I might add! TAA DAA!

Gosh, it's great fun to switch hats from helper hero to this, you know, death loving, super villain. It's great fun. And of course, Arrow and Flash are a very different vibe, each show, even though they're in the same universe. Arrow seems to be the darker more serious and Flash seems to be a tad more bubbly and friendly. My villain character was a little bit over the top anyway, so I just played in the same way for both shows.

At the end of The Flash episode, it was episode 1x22, "Rogue Air," you'll see me with a bunch of my Rogue friends, and I use "friends" lightly because none of us like each other, but we're being transported. They wanted to move us from one lockdown area to another, safely, without harm. We got loose. So, Captain Cold, played by Wentworth Miller, gives me a shot in the face during this whole scuffle.The question remains: was I killed or was I just kind of silenced for a minute? I turned toward the camera and there was just had freezer burn across my face. I fell out of frame and that's the last time you saw me - with my eyes open. Then it was referred to, Liam McIntyre, he asked Wentworth Miller, "Why did you shoot him?" When we were filming, he did a few takes going "Why did you kill him?" So, the fact that they said, "Why did you shoot him?" I don't want to get caught up in semantics but there might be a possible return!

In a comic book world, death means nothing, but was this death? They never really did paint it as a full on death. I think I could give the writers some leeway. If I'm busy they don't have to bring me back, if I'm free and available and they want me, I'll return. We'll see.

Would you want to see Doug Jones return to the Arrow/Flash universe as Deathbolt or do you think Barry and Oliver have seen the last of him?