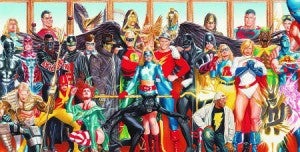 This month's solicitations featured a whole lot of alternative-earth versions of DC heroes, and officially solicited the long-anticipated beginning of Earth 2 by James Robinson and Nicola Scott. It was surprising to many that Superman, Batman and Wonder Woman were the trio headlining the relaunched Justice Society of America title, and even more surprising to others that it appears at least Batman and Wonder Woman may be legacy heroes (Batman's escrima sticks are very much like what Dick Grayson is best-known for using, while Wonder Woman seemed to have that field-of-stars thing that Donna Troy is so famous for going on in her hair). The solicitation promises some familiar faces from the pre-relaunch Justice Society, but just the idea of legacy heroes in the new DC multiverse begs the question: Who needs to appear in this book? Blue Devil Once a compelling character who was able to support his own title (albeit briefly), Blue Devil has had a hard time finding his niche in the DC Universe in recent years. Still, isn't that what the New 52 is all about? Reinventing the DC Universe has allowed characters from Milestone, Vertigo and WildStorm to enter the Justice League and their world with a minimum of fuss; who's to say that it can't work just as well to take characters who have existed on the fringes of the DC Universe, never quite finding a place to fit in, and locking them into a role? Black Lightning Arguably one of DC's best-known and most licensable African-American characters, his electrical powers seem a touch redundant when he's standing in a world where he came into being at the same time (or at least within a year or two) of Static, a better-known, electrically-powered African American superhero. Making him an Earth 2 hero would not only allow him to be differentiated from Static in the eyes of fans but also creates the opportunity for his daughter to remain an important part of the superhero community, standing shoulder to shoulder with Alan Scott's kids on the front lines. Impulse Ever since being reinvented during Geoff Johns's critically-acclaimed run on Teen Titans, Bart Allen just hasn't been that compelling. As Kid Flash, he not only took on the name and costume but also the fairly bland name of his predecessor, but a lot of the personality, too. It's been ages since I remember reading a story featuring the character that was truly different and compelling, and the version of Bart that was so ably established by Todd Dezago and Mark Waid is sorely missed. Magog While his solo series didn't work out for DC, and even his JSA appearances were somewhat spotty, Magog as a character is an interesting addition, one that manages to homage one of the publisher's great successes of the last thirty years without actually messing with the timeline in a way that they would by bringing Kingdom Come into canon and having those characters interact with the "real" DCU. Because we all know that would be a bad idea. Red Tornado A character who has, for years, struggled to fit in with the big guns of the JLA, Red Tornado is also the product of Ma Hunkel's legacy and a perfect candidate to join the JSA. He could shed the baggage of "always being the team member who falls apart" and start to serve the purpose that characters like Martian Manhunter and the android Hourman have over the years, exploring what humanity is to one who isn't human. Hourman Oh yeah--if not him, let's just see the Android Hourman. Same basic idea--same practical uses and also a tie to a traditional JSAer--but with arguably more fond memories and a little less skepticism on the part of the fans than Red Tornado has. Stargirl Arguably the best original character ever created by DC Chief Creative Officer Geoff Johns, Courtney has been missing since the relaunch. It makes sense, given the fact that her backstory doesn't really work in a world where superheroes have only been around for a short time, but it doesn't make the absence of such a great character from the DCU any less of a loss. She's also the most obvious character on the JSA who has no real analog in the DC Universe at least at present, and something tells me James Robinson might be able to find a way to work with the Starman legacy in an interesting way...! Ted Kord In the new DC Universe, it's been said that Ted Kord never even existed and so the Giffen-DeMatteis Justice League series never happened. Just enough hints have been dropped, though, to suggest that Booster Gold may have been adventuring through time with Rip Hunter in the not-too-distant past before the Justice League International called on his special services so I'd like to think that on Earth 2, where the timeline is maybe a little more similar to what fans were familiar with before the New 52 relaunch, Ted was able to be saved during Geoff Johns and Jeff Katz's "Blue and Gold" storyline. Is that too much to ask? If not him, maybe the Dibnys? James Robinson did say during a recent interview that they were his favorite DC couple! Wally West His absence from the world of the New 52 is conspicuous. As arguably the only legacy hero since the Silver Age to completely overshadow his mentor and embody the identity of the character in the minds of the readers, and his absence from the New 52 relaunch is one that caused a good deal of consternation and head-scratching. Slotting him into a team with his old buddies Dick Grayson and Donna Troy would make a ton of sense, and giving him a place where he can be The Flash, no questions asked? Well, that's just obvious.