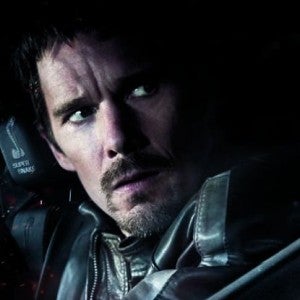 In the future, every actor will be rumored to play Batman for at least 15 minutes. When news of a Batman Vs. Superman movie was first announced, everyone seemed to be assuming Warner Bros. would be looking for a younger actor to play Batman for several years. All the initial rumors seemed to revolve around up and coming young stars.

However, when rumors surfaced that Warner Bros. was actually looking for an actor in his late thirties or early forties to play an older Batman, the casting rumors rapidly changed. The latest rumor suggests that Ethan Hawke could be up for the Batman role or at least some role in Batman Vs. Superman.

According to a fan site called DC Warnerbros (not the actual Warner Bros.), one of their contributors has said that Ethan Hawke was seen meeting with Man Of Steel director Zack Snyder and Man of Steel executive producer Thomas Tull in Wisconsin (no explanation as to why they chose to meet there). However, with Ethan Hawke seeing a resurgence in his career, it wouldn't be surprising that Snyder and Tull might meet with him.

What is a little more surprising is that the site's source also indicated that Hawke might be up for the Batman role. Ethan Hawke is 42 years old, so he would fit the age range that Warner Bros. is reportedly seeking for the role.

While we might be tempted to pass on this rumor, given all the various actors being tied to the Batman role, there is one other thing that makes us think there could be something to this story. In an interview with Details Magazine back in 2011, Ethan Hawk revealed that he previously was offered the Batman role, but he turned it down, which he later regretted doing so. Hawke said, "Now I wish I'd done it, because I could have used it to do other things."

Could Ethan Hawke be getting a second chance at Batman?

Ethan Hawke Up For Batman Role In Batman Vs. Superman? It Wouldn't Be His First Shot At Batman.