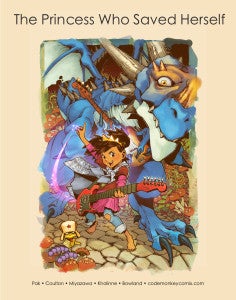 Just a few minutes ago, Greg Pak and Jonathan Coulton announced plans to add a children's book based on Coulton's song "The Princess Who Saved Herself" to the ongoing Kickstarter campaign for their upcoming Monkeybrain graphic novel Code Monkey Save World. If the pair can generate another $35,000 in the final nine days of their campaign (they've raised over $215,000 in the first 22), the book will be added to the list of stuff that any Kickstarter backer making a pledge of over $15 will be able to download or have mailed to them. This isn't the first time they've added a "stretch goal" to the Kickstarter campaign, which was fully funded for its initial $39,000 in about twelve hours on the first day. They've also added pages to the book, a short feature by Fred Van Lente and Ryan Dunlavey and, most recently, funded a new studio album by Coulton, who will record an acoustic "soundtrack" of the songs that inspired the graphic novel. Pak joined ComicBook.com to talk about the latest announcement. If you didn't read it already, you can go back to our previous roundtable interview with Pak, Coulton and Miyazawa (conducted when the soundtrack was announced), as well.

ComicBook.com: Alright - What made you decide to go with a stand-alone kids' book instead of just making it part of Code Monkey Save World? 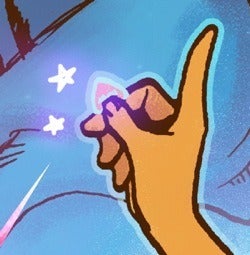 Greg Pak: "The Princess Who Saved Herself" tells the story of a tough, tomboy princess who encounters a scary dragon and a creepy witch and ends up recruiting them for her rock band. It inhabits its own world and it's really just absolutely perfect for kids. So we thought it would work best as a separate entity from Code Monkey Save World -- it can be its own thing rather than an add-on to the existing book, which will give it a better chance of finding its own special audience.

ComicBook.com: When can we expect this one to be finished, assuming the stretch goal is met?

Pak: If we hit the stretch goal, the entire "Code Monkey Save World" creative team will shift over to "The Princess Who Saved Herself" after we finish the graphic novel. We haven't set the exact date for ourselves yet, but if all goes as we hope, the children's book should be done in the first few months of 2014.

ComicBook.com: This kind of project often attracts mainstream publishers--I've seen similar books written by or at least based on work from Bob Dylan and Weird Al Yankovic and Coulton's buddies They Might Be Giants. That' just the ones off the top of my head. Do you plan on staying at Monkeybrain for digital or will you seek out a conventional publisher for the book?

Pak: That's all up in the air at the moment. We just know that if we hit the stretch goal, we'll be providing every backer at the $15 level and above with a free digital download of the book. Beyond that we're going to take our time figuring out the next steps. If things go really crazy with the Kickstarter, we might consider printing physical copies ourselves, but all that remains to be seen.

ComicBook.com: This one seems like it's got a broad appeal all its own, too. I mean, it's one of those stories that's just great in that comics is so rarely able to bring girls a strong role model who's not too dark and gritty for younger kids. Was that part of what drew you to it?

Pak: Sure. I mean, "The Princess Who Saved Herself" is really a children's book rather than a comic book. But just from talking with friends who are parents of little girls, I'm pretty sure there's a considerable audience for a book featuring a kick-butt princess. And for me as a writer, it's always great to stretch into new genres and styles and tones. I've had a ton of fun over the years writing very serious books and very silly books at the same time -- like writing Magneto Testament at the same time as Incredible Hercules. So I'm very excited about the possibility of diving into a story like this.

ComicBook.com: Is this one a bit easier to take on? I mean, while most of Coulton's music tells a story, this one has a very particular narrative, and many of the characters are described in the text!

Pak: Great question. It's a more compact story than Code Monkey Save World, and yes, the song really tells a perfect little story. But there are some fun challenges ahead in determining how much more background and narrative and drama the story really wants. There's also some implied sadness in the story -- the princess has no mother and father and lives all alone. We've got some decisions to make about how much to explore that aspect of the Princess. All great challenges -- we're champing at the bit for this one. Fingers crossed!

ComicBook.com: This project keeps getting more epic. Do you have any more cool stretch goal ideas in mind for if this one gets surpassed and you've got another week to go?

Pak: We've definitely been talking about it. But we're taking things one step at a time, making sure we really understand all the creative and business ramifications of everything we add to the project. But yes, if we hit this goal quickly, we'll almost certainly come up with another big idea or two to make the package for our backers even better. And that really has been the amazing thing for us. First, we've just been overwhelmed with the incredible, warm response of our backers -- you guys are amazing! And second, we've loved the way the rising tide lifts all boats here -- the more backing we get, the more we've been able to improve the whole shebang. We went from 60 to 96 pages. We added a two page Fred Van Lente/Ryan Dunlavey story. We added stickers to all mailed rewards and mini-posters to folks at the $35 level and above. We added a brand new acoustic album featuring the songs that inspired the graphic novel to all backers at the $15 level and above. And now we have a shot at adding a whole 'nother book? It's a little nuts, and we're loving it.

Exclusive: Greg Pak Talks The Princess Who Saved Herself