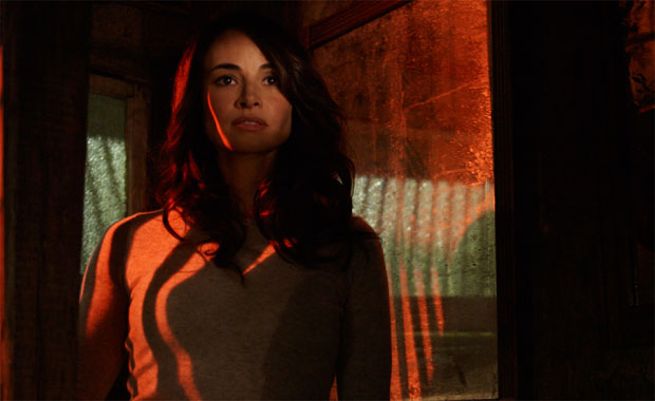 In an exclusive interview with Comicbook.com, Mia Maestro talked about her experience on The Strain TV series, which was released on DVD and Blu-ray today.

Maestro told us that her two favorite episodes of the first season were episodes eight and eleven. In particular with episode eight, Maestro noted that it was "action-packed" and that "a lot of the characters converged for the first time."

In preparing for her role, Maestro read the books, calling them "an incredible story." She added the books were "full of imagination, epic, and vast." Maestro said they were given freedom to interpret things, but some things stayed the same from the books.

In regards to working with Guillermo del Toro on the pilot, Maestro described it as a "wonderful experience." Maestro says that del Toro "cemented the staples of their characters in that month and a half that they worked together." Maestro also indicated that del Toro would be even more involved in Season 2.

"Next year in Season 2, we're going to have Guillermo on set with us for the first two months every day," said Maestro. "It's just wonderful to have him so much involved."

In regards to if he would direct any episodes in Season 2, Maestro said that while it might change she thought del Toro had decided to be with them as a producer for two months instead of just directing one episode.

As far as any challenging or funny moments on set, Maestro said, "In episode ten, we had to crawl in a tiny, tiny tunnel. And that was fun and challenging. And some people got stuck. I didn't, because I'm the smallest one of them all."

In regards to Season 2, Maestro said that there were some "amazing new ideas" for Season 2, but she said that she didn't have scripts yet. As far as what she hopes is in store for her character Nora Martinez in Season 2, Maestro said she's anticipating "big character development in terms of who she is and what she becomes in terms of what she had to go through in Season 1 in killing her mother and leaving her past behind, committing herself 100% to fighting this battle."

Maestro also recently released an album, mentioning that she got to sing one of her songs in the finale. Maestro said she will be touring to support her album until she starts filming for Season 2.

As far as what she was looking forward to most in Season 2, Maestro said "developing the story more and not having to explain so much of what's going on through the characters and to get just more into the core and heart of the story."