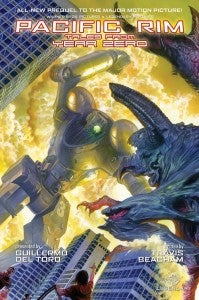 Today is the release date for Pacific Rim: Tales From Year Zero, an anthology of short comic book stories that take place before the film Pacific Rim, coming to theaters in a few weeks from Warner Bros., Legendary Pictures and Hellboy director Guillermo del Toro. Beacham wrote the screenplay before turning his attention to the comic book, which fills in gaps in the film's timeline with information that he and del Toro put together but never used onscreen. The book is segmented into five sections, with different artists working on each; the story begins with the first kaiju attack and moves through the founding of the Jaeger program and the training program for Jaeger pilots. It features a cover by Alex Ross and art from Sean Chen, Yvel Guichet and Pericles Junior, among others. Beacham joined ComicBook.com for a talk about the movie, the graphic novel and what's next for Pacific Rim. ComicBook.com: There's a truism that you could do all kinds of things visually with comics that you can't do onscreen. Do you think that's true anymore? Travis Beacham: Oh, yeah. I've had that question a few times: "What can you do for the comic that you couldn't do in the movie?" And I think the answer is, not a lot. The movie has some of the most eye-popping effects that I've ever seen. So really in writing the graphic novel I wasn't thinking so much in terms of how to think of something even more insane than the movie. It was really thinking about, what are the details that we don't get in the movie? And sort of thinking more in terms of the story than in terms of what would make really great sequences. I think part of what makes a great sequence a great sequence is the context in which it happens. 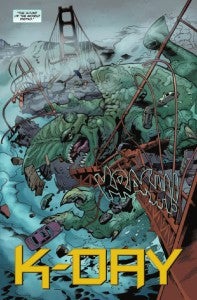 ComicBook.com: I would think that at least 10, 20% of your job is creating this elaborate backstory that will never, ever see the screen so that everything that comes later has a consistent internal logic to it. Beacham: Oh, yeah. That's the good way to do it. I think there's a lot of films that create only as much as they need for the story but I've always much prefered the other way. It's a whole lot more work but I think for guys like me who are so into other worlds and other genre stories and universes and that sort of thing--and who love maps at the beginning of Tolkien novels and whatnot--it's a lot of work but it's work that I think is really creatively rewarding. ComicBook.com: I would think when you sit down to do a sequel or anything like that, it makes things a lot easier. Beacham: Yeah, absolutely. I think the logic that we approached it with, in creating the world around the movie and to that effect also creating the material that would form the substance of the comic, is that the movie kind of drops you into history already in progress. It takes place a good decade or so after the first kaiju attack for the most part and so kaiju have been attacking for a little while, Jaegers have been around for a little while--the graphic novel tells the story of how our world became the world that you see in the movie. I think just in creating the world around the movie becuase like you said you want to be able to casually reference things without having to make stuff up as you go along, you want to have a complete idea of the world so that everything does have an internal logic and that means creating an awful lot that doesn't necessarily get used in th emovie or even need to get used. The fact that you thought about it so much and that you've talked about it so much and that you've set it down on paper as being a fact of the world--that sort of informs your confidence in the telling of the story and I think the viewers can subconsciously sense that. I think the audience knows implicitly when it's in the hands of someone who knows what's going on versus someone who's just making it up as they go. 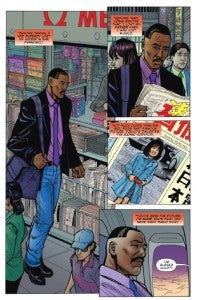 ComicBook.com: Obviously there's a positive audience reaction to something like that in Star Wars - where part of the appeal is the offhandedness of the references--it left viewers wondering what it all meant and people wanted to see more of the world. Beacham: Yeah, that's definitely what I love about that sort of thing. Especially with Wiki culture nowadays where you've got so many wikis about every sort of fan universe that you can think of; I think that really taps into that impulse. But yeah, I think it's better to always kind of be on the edge of "What was that, what did he just say, what did he just reference?" It's better to provoke that sort of leaning toward curiousity and to prevent the feeling that you know what someone is going to say next, so you don't have to listen to this part. I'll just wait to a part where I'm curious about. I think it's a difficult needle to thread and I think when you get it done in the right way it can be really rewarding and it can instill the possibility of discovery for people who are experiencing the story. ComicBook.com: To my mind, when I'm looking at a project like this, it strikes me that it's more likely to be segregated in terms of keeping the robots and monsters kind of apart, where the movie is the big action orgy of putting all the pieces together. Put another way, were you glad to be able to do this without being forced to include it in the film? To do it right would slow the film way down and to do it wrong would be a shame. Beacham: I think that makes total sense; that's absolutely right and that's what I really like about the opportunity of doing the graphic novel. The movie with the special effects can do sort of anything--but we do have all this stuff that we don't necessarily get to in the movie that I think there's going to be a lot of curiousity about and already I know I've gotten a lot of questions on Twitter and that sort of thing, saying "Why are there two pilots? How did they decide that? How long did it take to build these things?" And like you said, in a movie--especially in this movie which is so tightly-structured and so meticulously constructed, I think that kind of exposition could only slow it down. But I do think there's a lot of curiousity about that. It was fun for me as a writer having worked out all this project beforehand to have this chance to kind of dramatize how that process works and how you go from monsters attacking to "Let's build robots," to putting two pilots in the robots and how does the neural uplink work and what does that mean to them? What's it like to be connected to someone else's brain and to someone else's thoughts and does there need to be any sort of special qualifications there. I think there's a lot of substance for a dramatic story in those sorts of questions that couldn't necessarily be told. We pore over every sort of iteration of consequences that you could possibly have with two pilots--some of it in the movie and some of it in the graphic novel and then some of it we're saving obviously for later. But a lot of the heart of the movie are those sorts of questions. The kaiju/robot battles are great and they're so lavish and they're so lush and they're some of the best effects work I've ever seen but I think part of what makes the movie work--like when you see the Gipsy Danger coming and hitting the kaiju with the boat, obviously everybody gets a kick out of it. But part of when you see a movie what makes that so satisfying and what I'm really itching for everyone to see is what's happening inside these people who are driving it and the context in which that scene takes palce--it makes it hundreds of times more satisfying when they smack that monster upside the head with the boat. The character stuff in the movie I think works on a level that you'd be hard-pressed to convey in the modern, trailer-oriented marketing scheme. 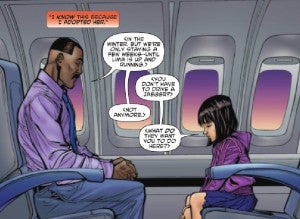 ComicBook.com: I think the blockbuster has evolved in the last ten years or so to where we can do so much, it's no longer enough just to have a lot of cool crap happening. Beacham: Exactly. I always say that when you look at movies like this, there's no reason why you can't have good characters. There's no reason why you can't have great characterization. There's no reason why that would keeep people away, necessarily. It's just a decision to do that. It's a decision to care about that and to focus on that and that's really the only obstacle that you need to cross--you just need to make an active decision to be invested in that and I think a lot of writers are. I think once you move up the scale of who's in charge of the whole process, you get less and less invested but I think part of what I really like about working with Legendary is that they aren't the sorts of producers definitely who are interested in that sort of thing; they're interested in character and they definitely allowed us the freedom to pursue that angle. ComicBook.com: Certainly I think that Legendary has struck me as very serious about these properties. You don't do forty movies a year, but you do the three that you can knock out of the park. For you, has it been really a lot more simple trying to build this world knowing that Legendary is behind it so barring a huge, unforeseen catastrophe you've got support? Beacham: It's been absolutely liberating. You're free not to think about it in mercenary terms about what people want to see and that kind of thing and talking about the graphic novel and potentially other graphic novels and a sequel and that sort of thing and when you're exploring this world as a writer and as a creator, having that sort of umbrella over you of producers who are really invested in it, I think it does allow you a lot of freedom to let the universe grow organically and in a way that makes sense to the story and to the characters. ComicBook.com: If there IS another graphic novel, what artist in comics would you want to work with? Beacham: Oh, wow...there's probably dozens, but the first one that comes to my mind, actually, is Stuart Immonen. Because I really loved his work for Nextwave which I think is like an Adult Swim cartoon on paper. But I love the dynamism in his work and the way that he expresses action scenes very simply but very dynamically I think is really interesting. There's probably dozens. I really like Frank Quitely. I like the artists who, you look at their work instantly and you know exactly who that is. It's instantly recognizable, they have such a distinct voice; I think those are the kinds of artists that I would really love to work with.